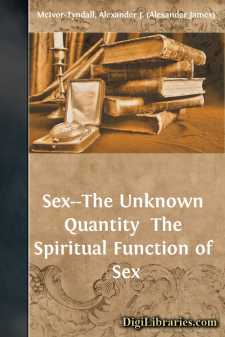 Add to My Favorites
Published: 9 years ago
Downloads: 276
Rating: (0 Votes)

The fundamental basis of the universe is Sex.

Sex is the fulcrum upon which our life-activities turn. It is the life of Man and of planets, and ignorance of the laws of Sex is the cause of death of both. It is the conjunction of the forces of attraction and repulsion; the positive and negative; the centripetal and centrifugal forces which hold stars and planets in their orbits—or rather, it is the two expressions of the one power, which is both male and female, the eternal bi-une sex principle which is Life.

The law of attraction everywhere, from that of the sun and the earth, to that of the iron and the magnet, the "affinity" of the various gases and liquids, is founded upon Sex. Cohesion is but another name for copulation, and repulsion is absence of the power of contact. The law of attraction and cohesion everywhere is the law of sex-activity. "The law of conjugality is the basis of every force in nature," says a scientist. Sex constitutes the eternal energy from which issue all the forms and differentiations which we see manifested in the visible universe, and it is equally the foundation of the realms invisible.

Sex is the algebracial X—the unknown quantity which defies analysis.

Plato is said to have observed that "the son of man is written all over the visible world in the form of an X;" and also that "the second coming of Christ is rightly symbolized by a cross." The cross is but another form of the X—the eternal bi-une sex-principle in action.

The Female Principle attracts to a central union; draws toward and within itself. The home is established and maintained by the female element; the nest is the special property of the female bird. Thus the Female Principle best expresses the highest love because the object of love is union. Hate scatters, disintegrates, destroys. Wherever the struggle between love and hate is seen, there we will find a lack of union. There may be marriage, but there will not be mating. True union must come from the Center of Life—from the spiritual Reality, which the physical only imperfectly shadows forth.

Involution is best described as feminine, and wherever we note the upward trend of the feminine element in Society, we may know that the earth is on its involutionary path; the end of a cycle is at hand, and social unrest and marital upheaval are inevitable, because Love is in the ascendant and love demands union—not merely matrimony.

It has been said that the most primal instinct is that of hunger, but without Sex there would not be even the urge toward physical sustenance....