by William I. Thomas 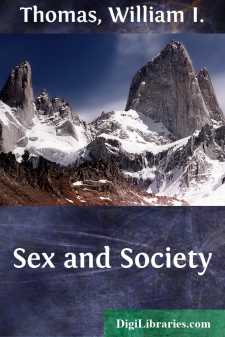 ORGANIC DIFFERENCES IN THE SEXES

A grand difference between plant and animal life lies in the fact that the plant is concerned chiefly with storing energy, and the animal with consuming it. The plant by a very slow process converts lifeless into living matter, expending little energy and living at a profit. The animal is unable to change lifeless into living matter, but has developed organs of locomotion, ingestion, and digestion which enable it to prey upon the plant world and upon other animal forms; and in contrast with plant life it lives at a loss of energy. Expressed in biological formula, the habit of the plant is predominantly anabolic, that of the animal predominantly katabolic.

Certain biologists, limiting their attention in the main to the lower forms of life, have maintained very plausibly that males are more katabolic than females, and that maleness is the product of influences tending to produce a katabolic habit of body. If this assumption is correct, maleness and femaleness are merely a repetition of the contrast existing between the animal and the plant. The katabolic animal form, through its rapid destruction of energy, has been carried developmentally away from the anabolic plant form; and of the two sexes the male has been carried farther than the female from the plant process. The body of morphological, physiological, ethnological, and demographic data which follows becomes coherent, indeed, only on the assumption that woman stands nearer to the plant process than man, representing the constructive as opposed to the disruptive metabolic tendency.

The researches of Düsing, supplementing the antecedent observations of Ploss, and further supplemented by the ethnological data collected by Westermarck, seem to demonstrate a connection between an abundance of nutrition and females, and between scarcity and males, in relatively higher animal forms and in man. The main facts in support of the theory that such a connection exists are the following: Furriers testify that rich regions yield more furs from females and poor regions more from males. In high altitudes, where nutrition is scant, the birthrate of boys is high as compared with lower altitudes in the same locality. Ploss has pointed out, for instance, that in Saxony from 1847 to 1849 the yield of rye fell, and the birth-rate of boys rose with the approach of high altitudes. More boys are born in the country than in cities, because city diet is richer, especially in meat; Düsing shows that in Prussia the numerical excess of boys is greatest in the country districts, less in the villages, still less in the cities, and least in Berlin. In times of war, famine, and migration more boys are born, and more are born also in poor than in well-to-do families. European statistics show that when food-stuffs are high or scarce the number of marriages diminishes, and in consequence a diminished number of births follows, and a heightened percentage of boys; with the recurrence of prosperity and an increased number of marriages and births, the percentage of female births rises (though it never equals numerically that of the males). More children are born from warm-weather than from cold-weather conceptions, but relatively more boys are born from cold-weather conceptions....