Seven Wives and Seven Prisons; Or, Experiences in the Life of a Matrimonial Monomaniac. a True Story 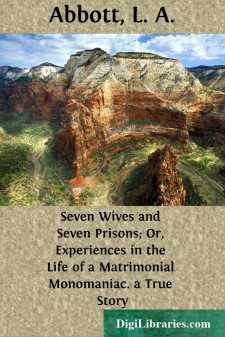 CHAPTER I. THE FIRST AND WORST WIFE

SOME one has said that if any man would faithfully write his autobiography, giving truly his own history and experiences, the ills and joys, the haps and mishaps that had fallen to his lot, he could not fail to make an interesting story; and Disraeli makes Sidonia say that there is romance in every life. How much romance, as well as sad reality, there is in the life of a man who, among other experiences, has married seven wives, and has been seven times in prison—solely on account of the seven wives, may be learned from the pages that follow.

I was born in the town of Chatham, Columbia County, New York, in September, 1813. My father was a New Englander, who married three times, and I was the eldest son of his third wife, a woman of Dutch descent, or, as she would have boosted if she had been rich, one of the old Knickerbockers of New York. My parents were simply honest, hard—working, worthy people, who earned a good livelihood, brought up their children to work, behaved themselves, and were respected by their neighbors. They had a homestead and a small farm of thirty acres, and on the place was a blacksmith shop in which my father worked daily, shoeing horses and cattle for farmers and others who came to the shop from miles around.

There were three young boys of us at home, and we had a chance to go to school in the winter, while during the summer we worked on the little farm and did the "chores" about the house and barn. But by the time I was twelve years old I began to blow and strike in the blacksmith shop, and when I was sixteen years old I could shoe horses well, and considered myself master of the trade. At the age of eighteen, I went into business with my father, and as I was now entitled to a share of the profits, I married the daughter of a well-to-do neighboring farmer, and we began our new life in part of my father's house, setting up for ourselves, and doing our own house-keeping.

I ought to have known then that marrying thus early in life, and especially marrying the woman I did, was about the most foolish thing I could do. I found it out afterwards, and was frequently and painfully reminded of it through many long years. But all seemed bright enough at the start. My wife was a good-looking woman of just my own age; her family was most respectable; two of her brothers subsequently became ministers of the gospel; and all the children had been carefully brought up. I was thought to have made a good match; but a few years developed that had wedded a most unworthy woman.

Seventeen months after our marriage, our oldest child, Henry, was born. Meanwhile we had gone to Sidney, Delaware County, where my father opened a shop. I still continued in business with him, and during our stay at Sidney, my daughter, Elizabeth, was born....