Seven Little People and their Friends 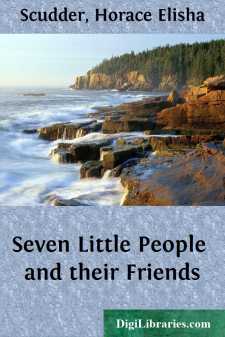 Wish the First.—Under the Sea.

ITTLE Effie Gilder's porridge did taste good! and so it ought; for beside that Mother Gilder made it, and Mother Gilder's porridge was always just right, Effie was eating it on her seat upon the sea-shore in front of her father's house. The sun was just going down and the tide was rising, so that the little waves came tumbling up on the beach, as if they were racing, each one falling headlong on the sand in the scramble to get there first; and then slipping back again, there would be left a long streak of white foam just out of reach of Effie. She was sitting on what she called her chair, but it was a chair without legs or back or arms—only a great flat stone, where she used to come every sunshiny afternoon and eat her bowl of porridge.

It was smoking-hot—that porridge! and she was eating away with a great relish, holding the bowl in her lap and drumming upon it with her drumstick of a spoon. I wish you could have seen her as she sat there, with her hat falling off and the sun touching her hair and turning the rich auburn into a golden colour. But somebody did see her; for just before the sun went down, Effie spied an old man coming along the beach to the place where she sat. "That must be Uncle Ralph," thought she, "coming home from fishing." "No," she said; as he came nearer, "it isn't, it's Granther Allen." "Why no! it isn't Granther; who can it be? what a queer old man!"

"Effie spied an old man coming along the beach."

By this time the old man had come quite near. He was a very old man. His hair was long and as white as snow; he was so bent over that as he leaned upon his smooth stout cane, his head almost touched the knob on the top of it; and it kept wagging sidewise, as if he were saying "No" all the time. He had on a long grey coat almost the colour of his hair, and it reached down to his feet on which was a pair of shoes so covered with dust that they were of the same colour as his coat; and his hat was the oddest of all! it was very high and peaked, and looked as if it had been rubbed in the flour barrel before he put it on.

This old man came up toward Effie very slowly, his head shaking all the time and his feet dragging one after the other as if he could hardly reach her. Effie began to be frightened, but when he spoke to her it was with such a sweet musical voice that she thought she had never heard anything half so beautiful.

"My little child," said he, "I am very tired; I have come a long way to-day and have had nothing to eat since morning. Will you give me some of your porridge that looks so nice?"

"Oh yes! sir," said Effie, jumping up and giving him the bowl. "But there isn't much left. Won t you come into the house and mother will give you some bread."

"Oh, no! my little girl," said the old man. "I do not need anything more than this porridge to make me strong again;" and as he spoke, he raised himself up and stood as straight as his own smooth stick that his hand hardly rested on; and his head stopped wagging, and he stood there a tall old man with a beautiful face and such a beautiful voice as he asked again:

"What is your name, my little girl?"

"Effie Gilder, sir. And this is my birth-day; I'm six years old to-day."

"Six years old to-day! and what shall I give you, little Effie, on this your birth-day? I love all good little children, and you were good to me to give me your porridge....