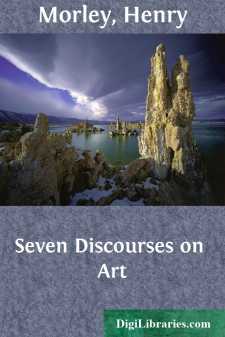 It is a happy memory that associates the foundation of our Royal Academy with the delivery of these inaugural discourses by Sir Joshua Reynolds, on the opening of the schools, and at the first annual meetings for the distribution of its prizes.  They laid down principles of art from the point of view of a man of genius who had made his power felt, and with the clear good sense which is the foundation of all work that looks upward and may hope to live.  The truths here expressed concerning Art may, with slight adjustment of the way of thought, be applied to Literature or to any exercise of the best powers of mind for shaping the delights that raise us to the larger sense of life.  In his separation of the utterance of whole truths from insistance upon accidents of detail, Reynolds was right, because he guarded the expression of his view with careful definitions of its limits.  In the same way Boileau was right, as a critic of Literature, in demanding everywhere good sense, in condemning the paste brilliants of a style then in decay, and fixing attention upon the masterly simplicity of Roman poets in the time of Augustus.  Critics by rule of thumb reduced the principles clearly defined by Boileau to a dull convention, against which there came in course of time a strong reaction.  In like manner the teaching of Reynolds was applied by dull men to much vague and conventional generalisation in the name of dignity.  Nevertheless, Reynolds taught essential truths of Art.  The principles laid down by him will never fail to give strength to the right artist, or true guidance towards the appreciation of good art, though here and there we may not wholly assent to some passing application of them, where the difference may be great between a fashion of thought in his time and in ours.  A righteous enforcement of exact truth in our day has led many into a readiness to appreciate more really the minute imitation of a satin dress, or a red herring, than the noblest figure in the best of Raffaelle’s cartoons.  Much good should come of the diffusion of this wise little book.

Joshua Reynolds was born on the 15th of July, 1723, the son of a clergyman and schoolmaster, at Plympton in Devonshire.  His bent for Art was clear and strong from his childhood.  In 1741 at the age of nineteen, he began study, and studied for two yours in London under Thomas Hudson, a successful portrait painter.  Then he went back to Devonshire and painted portraits, aided for some time in his education by attention to the work of William Gandy of Exeter.  When twenty-six years old, in May, 1749, Reynolds was taken away by Captain Keppel to the Mediterranean, and brought into contact with the works of the great painters of Italy.  He stayed two years in Rome, and in accordance with the principles afterwards laid down in these lectures, he refused, when in Rome, commissions for copying, and gave his mind to minute observation of the art of the great masters by whose works he was surrounded.  He spent two months in Florence, six weeks in Venice, a few days in Bologna and Parma.  “If,” he said, “I had never seen any of the fine works of Correggio, I should never, perhaps, have remarked in Nature the expression which I find in one of his pieces; or if I had remarked it, I might have thought it too difficult, or perhaps impossible to execute.”

In 1753 Reynolds came back to England, and stayed three months in Devonshire before setting up a studio in London, in St....