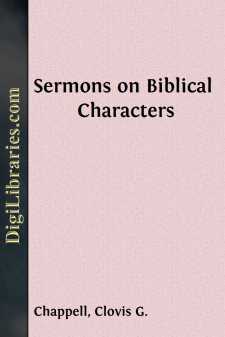 SERMONS ON BIBLICAL CHARACTERS I THE MISSING MAN—THOMAS

"Thomas, one of the twelve, called Didymus, was not with them when Jesus came." Did you notice the name of this man who was missing? Who was it when the little company met after the crucifixion that was not there? There was a man expected who failed to come. Who was this man? When the little company gathered in the upper room behind shut doors there was one chair that was vacant. Who should have occupied that chair?

Who was the missing man? It was not Pilate. We no more expected Pilate than we expected Judas. Pilate had had his chance at Jesus. Pilate had had an opportunity of knowing, of befriending Him, of serving Him. But Pilate had allowed his own interests to get the better of his conscience. Pilate had chosen the friendship of Caesar and had spurned the friendship of the King Eternal. So we did not expect Pilate to be present in this little company of the friends of Jesus who met on the resurrection side of the cross. Who was the missing man? It was not Caiaphas. He, too, had stood in the presence of Jesus, but his envy had made him blind. And he shouted "Blasphemy!" so loud that he drowned the voice of his conscience and the gentle whisperings of the Spirit of God. No, it was not Caiaphas, nor any of the indifferent or hostile crowd that we miss in this meeting.

Then, who was this missing man? And we read the text again and we find his name was Thomas. That is a very familiar name. Oh, yes; we remember Thomas quite well. It was Thomas who was missing. Now, Thomas was expected, for he was a member of the little band of disciples. He was one of the Twelve. He belonged to the Inner Circle. His fellow Christians had a right therefore to expect him. Yet Thomas was not with them.

And did you notice when it was that Thomas was absent? "Thomas was not with them when Jesus came." What an unfortunate time to be away! What a great calamity to have missed that service of all others! There was the little despondent, despairing company of ten meeting behind closed doors. They were sorrow-burdened and fear-filled. But Jesus came, and Thomas, the saddest and bitterest man of them all, was not there....