Serbia in Light and Darkness With Preface by the Archbishop of Canterbury, (1916) 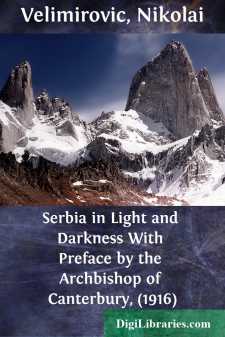 Delivered for the first time in the Chapter House of Canterbury Cathedral. Chairman: the Lord Archbishop of Canterbury.

YOUR GRACE, LADIES AND GENTLEMEN,

To come to Canterbury, to visit this Sion of the Church of England, that has been my dream since my fourteenth year, when I for the first time was told of what a spiritual work and of what an immortal glory this place has been the home. I dreamed a beautiful dream of hope to come here silently, to let every man, every house and every brick of the houses silently teach me, and, after having learned many fair and useful things, to return silently and thankfully home. Unfortunately I cannot now be a silent and contemplative pupil in this place, as I desired to be, but I must speak, forced by the time in which we are living and suffering. I will speak in order not to teach you, but to thank you. And I have to thank you much in the name of the Serbian nation and in my own name.

I thank you that you gave us Shakespeare, who is the second Bible for the world; and Milton the divine, and Newton and Herschel, the friends of the stars; and Wellington and Nelson, the fearless conquerors of the ambitious tyrant of the world; and Stephenson, the great inventor of the railway and the great annihilator of distance between man and man; and Carlyle, the enthusiastic apostle of work and hope; and Dickens, the advocate of the humble and poor; and Darwin, the ingenious revealer of brotherly unity of man and nature; and Ruskin, the splendid interpreter of beauty and truth; and Gladstone, the most accomplished type of a humane statesman; and Bishop Westcott and Cardinal Newman, the illuminated brains and warm hearts. No, I never will finish if I undertake to enumerate all the illustrious names which are known in Serbia as well as in England, and which would be preserved in their integrity in Serbia even if this island should sink under the waters.

I have to thank you for many sacrifices that the people of this country have made for Serbia during the present world-struggle. Many of the English nurses and doctors died in Serbia in trying courageously to save Serbian lives in the time of typhus-devastation. They lost their own lives saving ours, and I hope in losing their lives for their suffering neighbours they have found better ones. Their work will never be forgotten and their tombs will be respected as relics among us Serbs. Besides, Great Britain also sent military help for Serbia. It was dictated to Great Britain by the highest strategic reasons to send troops to Serbia, to the Danube, in order to stop the Germans there, to hinder their junction with the Bulgars, to annihilate all their plans and dreams regarding the East, to defend Serbia not only as Serbia, but as the gate of Egypt and India, and so to protect in the proper place and in the most efficacious manner her oriental Dominions. But seemingly England sent her troops to Serbia more to protect her honour than her Dominions, more to help Serbia than to defend Egypt and India. The number of these troops and the time when they arrived in Serbia indicate that. Hundreds of miles the Serbs had been driven back by the enemy before the British forces reached the Serbo-Greek frontier. But still they reached the Serbian land, they fought on Serbian soil and shed their noble blood defending that soil. Serbia will rather forget herself than the English lives sacrificed for her in such a catastrophic moment of her history.

England is THE GREATEST EMPIRE OF THE WORLD, not only at the present time, but since the beginning of human history....