'Sequil' Or Things Whitch Aint Finished in the First

by Henry A. (Henry Augustus) Shute 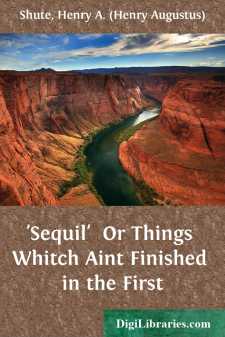 "SEQUIL" OR THINGS WHITCH AINT FINISHED IN THE FIRST

Sept. 7, 186- Gosh, what do you think, last nite father and mother and me and Keene and Cele and aunt Sarah was sitting at supper when father, he sed i am a going to read your diry tonite. Gosh i was scart for i hadent wrote ennything in it for a long time. so after supper i went over to mister Watsons and asked him if he dident want to see father and he sed he wood and i went home and told father mister Watson wanted him to come over jest as quick as he cood and father went over. i knew father woodent ever think of it agen. father and mister Watson Beanys father set and talked about what they usted to do and father sed do you remember Wats that time you and Bill Yung and Brad Purinton and Jack Fog went down to, and then he saw me and Beany lissening and he sed, you boys run away and he giv me 5 cents and me and Beany went over to old Si Smiths for some goozberies but i have got to wright that old diry some more whitch is pretty tuf, i have forgot whether it was brite and fair sence i wrote my last diry or not, but ennyway it is brite and fair today. Lots of things have hapened sense i wrote my last diry. Beanys father is a poliseman now and Beany feels prety big. Beany hadent better say mutch to me ennyway. the stewdcats have come back and they has been lots of fites. Scotty Briggam licked 2 stewdcats in one day. one day me and Pewt and Beany was standing in frunt of the libary and 2 stewdcats went in and Pewt threw a peace of dry mud and it hit the stewdcat rite in the neck and bust and went down his coller and he see us laffin and he walked rite out to where we was standing and he sed sorter sisy like whitch of you boys throwd that, and Pewt sed jest like him, if you are so smart you had better find out, and he grabed Pewt and throwd him rite in the guter and roled him round in the mud and hit him 3 good bats in the ear. me and Beany run and Pewt he was mad becaus we dident pich in and help him, but lots of times me and Beany has got licked and Pewt never helped us. i told Father about it and he sed he was glad of it and he wished the stewdcats had licked me and Beany two.

Sept. 8, 186- brite and fair. the band played tonite downtown. we all went down but mother and aunt Sarah and the baby and Franky and Georgie and Annie who was all two little except mother and aunt Sarah who had to stop and take care of them. the band played splendid and Fatty Walker jest pounded the base drum as hard as he cood. most of the fellers run round and played tag and hollered but i set still. i cant see how fellers can run round and holler when a band plays. they tried to pull me out of my seet but i giv Beany a good punch. when we came home mother asked if i had behaived and father sed i set there jest like a old potato. he sed i dident know much ennytime but when i herd music i dident know ennything.