Self Mastery Through Conscious Autosuggestion 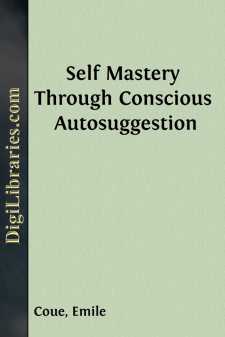 SELF MASTERY THROUGH CONSCIOUS AUTOSUGGESTION

Suggestion, or rather Autosuggestion, is quite a new subject, and yet at the same time it is as old as the world.

It is new in the sense that until now it has been wrongly studied and in consequence wrongly understood; it is old because it dates from the appearance of man on the earth. In fact autosuggestion is an instrument that we possess at birth, and in this instrument, or rather in this force, resides a marvelous and incalculable power, which according to circumstances produces the best or the worst results. Knowledge of this force is useful to each one of us, but it is peculiarly indispensable to doctors, magistrates, lawyers, and to those engaged in the work of education.

By knowing how to practise it consciously it is possible in the first place to avoid provoking in others bad autosuggestions which may have disastrous consequences, and secondly, consciously to provoke good ones instead, thus bringing physical health to the sick, and moral health to the neurotic and the erring, the unconscious victims of anterior autosuggestions, and to guide into the right path those who had a tendency to take the wrong one.

In order to understand properly the phenomena of suggestion, or to speak more correctly of autosuggestion, it is necessary to know that two absolutely distinct selves exist within us. Both are intelligent, but while one is conscious the other is unconscious. For this reason the existence of the latter generally escapes notice. It is however easy to prove its existence if one merely takes the trouble to examine certain phenomena and to reflect a few moments upon them. Let us take for instance the following examples:

Every one has heard of somnambulism; every one knows that a somnambulist gets up at night without waking, leaves his room after either dressing himself or not, goes downstairs, walks along corridors, and after having executed certain acts or accomplished certain work, returns to his room, goes to bed again, and shows next day the greatest astonishment at finding work finished which he had left unfinished the day before.

It is however he himself who has done it without being aware of it. What force has his body obeyed if it is not an unconscious force, in fact his unconscious self?

Let us now examine the alas, too frequent case of a drunkard attacked by delirium tremens. As though seized with madness he picks up the nearest weapon, knife, hammer, or hatchet, as the case may be, and strikes furiously those who are unlucky enough to be in his vicinity. Once the attack is over, he recovers his senses and contemplates with horror the scene of carnage around him, without realizing that he himself is the author of it. Here again is it not the unconscious self which has caused the unhappy man to act in this way? [*]