Selections From the Works of John Ruskin 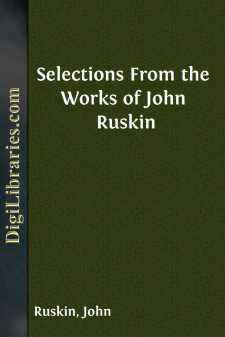 It is distinctive of the nineteenth century that in its passion for criticising everything in heaven and earth it by no means spared to criticise itself. Alike in Carlyle's fulminations against its insincerity, in Arnold's nice ridicule of Philistinism, and in Ruskin's repudiation of everything modern, we detect that fine dissatisfaction with the age which is perhaps only proof of its idealistic trend. For the various ills of society, each of these men had his panacea. What Carlyle had found in hero-worship and Arnold in Hellenic culture, Ruskin sought in the study of art; and it is of the last importance to remember that throughout his work he regarded himself not merely as a writer on painting or buildings or myths or landscape, but as the appointed critic of the age. For there existed in him, side by side with his consuming love of the beautiful, a rigorous Puritanism which was constantly correcting any tendency toward a mere cult of the aesthetic. It is with the interaction of these two forces that any study of the life and writings of Ruskin should be primarily concerned.

I THE LIFE OF RUSKIN

It is easy to trace in the life of Ruskin these two forces tending respectively toward the love of beauty and toward the contempt of mere beauty. They are, indeed, present from the beginning. He inherited from his Scotch parents that upright fearlessness which has always characterized the race. His stern mother "devoted him to God before he was born," and she guarded her gift with unremitting but perhaps misguided caution. The child was early taught to find most of his entertainment within himself, and when he did not, he was whipped. He had no playmates and few toys. His chief story-book was the Bible, which he read many times from cover to cover at his mother's knee. His father, the "perfectly honest wine-merchant," seems to have been the one to foster the boy's aesthetic sense; he was in the habit of reading aloud to his little family, and his son's apparently genuine appreciation of Scott, Pope, and Homer dates from the incredibly early age of five. It was his father, also, to whom he owed his early acquaintance with the finest landscape, for the boy was his companion in yearly business trips about Britain, and later visited, in his parents' company, Belgium, western Germany, and the Alps.

All this of course developed the child's precocity. He was early suffered and even encouraged to compose verses; by ten he had written a play, which has unfortunately been preserved. The hot-house rearing which his parents believed in, and his facility in teaching himself, tended to make a regular course of schooling a mere annoyance; such schooling as he had did not begin till he was fifteen, and lasted less than two years, and was broken by illness. But the chief effect of the sheltered life and advanced education to which he was subjected was to endow him with depth at the expense of breadth, and to deprive him of a possibly vulgar, but certainly healthy, contact with his kind, which, one must believe, would have checked a certain disposition in him to egotism, sentimentality, and dogmatic vehemence....