Selections from American poetry, with special reference to Poe, Longfellow, Lowell and Whittier 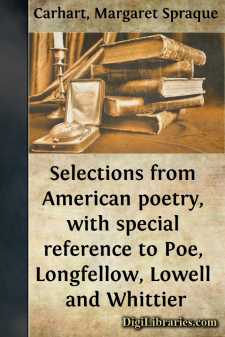 If we define poetry as the heart of man expressed in beautiful language, we shall not say that we have no national poetry. True, America has produced no Shakespeare and no Milton, but we have an inheritance in all English literature; and many poets in America have followed in the footsteps of their literary British forefathers.

Puritan life was severe. It was warfare, and manual labor of a most exhausting type, and loneliness, and devotion to a strict sense of duty. It was a life in which pleasure was given the least place and duty the greatest. Our Puritan ancestors thought music and poetry dangerous, if not actually sinful, because they made men think of this world rather than of heaven. When Anne Bradstreet wrote our first known American poems, she was expressing English thought; "The tenth muse" was not animated by the life around her, but was living in a dream of the land she had left behind; her poems are faint echoes of the poetry of England. After time had identified her with life in the new world, she wrote "Contemplations," in which her English nightingales are changed to crickets and her English gilli-flowers to American blackberry vines. The truly representative poetry of colonial times is Michael Wigglesworth's "Day of Doom". This is the real heart of the Puritan, his conscience, in imperfect rhyme. It fulfills the first part of our definition, but shows by its lack of beautiful style that both elements are necessary to produce real poetry.

Philip Freneau was the first American who sought to express his life in poetry. The test of beauty of language again excludes from real poetry some of his expressions and leaves us a few beautiful lyrics, such as "The Wild Honeysuckle," in which the poet sings his love of American nature. With them American poetry may be said to begin.

The fast historical event of national importance was the American Revolution. Amid the bitter years of want, of suffering, and of war; few men tried to write anything beautiful. Life was harsh and stirring and this note was echoed in all the literature. As a result we have narrative and political poetry, such as "The Battle of the Kegs" and "A Fable," dealing almost entirely with events and aiming to arouse military ardor. In "The Ballad of Nathan Hale," the musical expression of bravery, pride, and sympathy raises the poem so far above the rhymes of their period that it will long endure as the most memorable poetic expression of the Revolutionary period.

Poetry was still a thing of the moment, an avocation, not dignified by receiving the best of a man. With William Cullen Bryant came a change. He told our nation that in the new world as well as in the old some men should live for the beautiful. Everything in nature spoke to him in terms of human life. Other poets saw the relation between their own lives and the life of the flowers and the birds, but Bryant constantly expressed this relationship. The concluding stanza of "To a Waterfowl" is the most perfect example of this characteristic, but it underlies also the whole thought of his youthful poem "Thanatopsis" (A View of Death)....