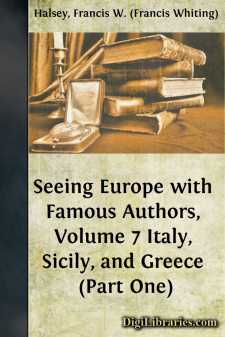 INTRODUCTION TO VOLUMES VII AND VIII Italy, Sicily and Greece

Tourists in great numbers now go to Italy by steamers that have Naples and Genoa for ports. By the fast Channel steamers, however, touching at Cherbourg and Havre, one may make the trip in less time (rail journey included). In going to Rome, four days could thus be saved; but the expense will be greater—perhaps forty per cent.

... "and now, fair Italy!Thou art the garden of the world, the homeOf all Art yields, and Nature can decree;Even in thy desert, what is like to thee?Thy very weeds are beautiful, thy wasteMore rich than other climes' fertility;Thy wreck a glory, and thy ruin gracedWith an immaculate charm which can not be defaced."

At least four civilizations, and probably five, have dominated Italy; together they cover a period of more than 3,000 years—Pelasgian, Etruscan, Greek, Roman, Italian. Of these the Pelasgian is, in the main, legendary. Next came the Etruscan. How old that civilization is no man knows, but its beginnings date from at least 1000 B.C.—that is, earlier than Homer's writings, and earlier by nearly three centuries than the wall built by Romulus around Rome. The Etruscan state was a federation of twelve cities, embracing a large part of central and northern Italy—from near Naples as far north perhaps as Milan and the great Lombard plain. Etruscans thus dominated the largest, and certainly the fairest, parts of Italy. Before Rome was founded, the Etruscan cities were populous and opulent commonwealths. Together they formed one of the great naval powers of the Mediterranean. Of their civilization, we have abundant knowledge from architectural remains, and, from thousands of inscriptions still extant. Cortona was one of their oldest towns. "Ere Troy itself arose, Cortona was."

After the Etruscans, came Greeks, who made flourishing settlements in southern Italy, the chief of which was Paestum, founded not later than 600 B.C. Stupendous ruins survive at Paestum; few more interesting ones have come down to us from the world of ancient Hellas. The oldest dates from about 570 B.C. Here was once the most fertile and beautiful part of Italy, celebrated for its flowers so that Virgil praised them. It is now a lonely and forsaken land, forbidding and malarious. Once thickly populated, it has become scarcely more than a haunt of buffalos and peasants, who wander indifferent among these colossal remains of a vanished race. These, however, are not the civilizations that do most attract tourists to Italy, but the remains found there of ancient Rome. Of that empire all modern men are heirs—heirs of her marvelous political structure, of her social and industrial laws.

Last of these five civilizations is the Italian, the beginnings of which date from Theodoric the Goth, who in the fifth century set up a kingdom independent of Rome; but Gothic rule was of short life, and then came the Lombards, who for two hundred years were dominant in northern and central parts, or until Charlemagne grasped their tottering kingdom and put on their famous Iron Crown....