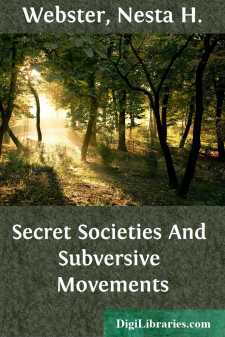 It is a matter of some regret to me that I have been so far unable to continue the series of studies on the French Revolution of which The Chevalier de Boufflers and The French Revolution, a Study in Democracy formed the first two volumes. But the state of the world at the end of the Great War seemed to demand an enquiry into the present phase of the revolutionary movement, hence my attempt to follow its course up to modern times in World Revolution. And now before returning to that first cataclysm I have felt impelled to devote one more book to the Revolution as a whole by going this time further back into the past and attempting to trace its origins from the first century of the Christian era. For it is only by taking a general survey of the movement that it is possible to understand the causes of any particular phase of its existence. The French Revolution did not arise merely out of conditions or ideas peculiar to the eighteenth century, nor the Bolshevist Revolution out of political and social conditions in Russia or the teaching of Karl Marx. Both these explosions were produced by forces which, making use of popular suffering and discontent, had long been gathering strength for an onslaught not only on Christianity, but on all social and moral order.

It is of immense significance to notice with what resentment this point of view is met in certain quarters. When I first began to write on revolution a well-known London publisher said to me, "Remember that if you take an anti-revolutionary line you will have the whole literary world against you." This appeared to me extraordinary. Why should the literary world sympathize with a movement which from the French Revolution onwards has always been directed against literature, art, and science, and has openly proclaimed its aim to exalt the manual workers over the intelligentsia? "Writers must be proscribed as the most dangerous enemies of the people," said Robespierre; his colleague Dumas said all clever men should be guillotined. "The system of persecution against men of talents was organized.... They cried out in the sections of Paris, 'Beware of that man for he has written a book!'" Precisely the same policy has been followed in Russia. Under Moderate Socialism in Germany the professors, not the "people," are starving in garrets. Yet the whole press of our country is permeated with subversive influences. Not merely in partisan works, but in manuals of history or literature for use in Schools, Burke is reproached for warning us against the French Revolution and Carlyle's panegyric is applauded. And whilst every slip on the part of an anti-revolutionary writer is seized on by the critics and held up as an example of the whole, the most glaring errors not only of conclusions but of facts pass unchallenged if they happen to be committed by a partisan of the movement. The principle laid down by Collot d'Herbois still holds good: "Tout est permis pour quiconque agit dans le sens de la révolution."

All this was unknown to me when I first embarked on my work....