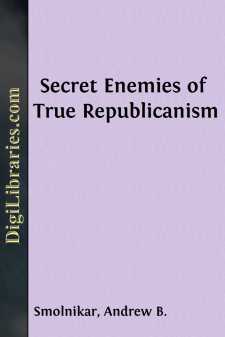 Louis Napoleon, according to a severe divine judgment Emperor of France, and James Buchanan, according to the merciful divine benignity President of the United States.

On the 27th January, 1859, while I was ready to start from Philadelphia, a messenger said, that on that day an article appeared in the German Democrat of that city for my use, and handed to me the number containing that article, from which we translate the following passages:

"A pamphlet of the famous Mr. Belly, directed to Emperor Napoleon III, was announced in Paris on all corners of the streets with very large letters, under the inscription

"Whereas nothing can be published in Paris without the permission of the Imperial censorship, it is supposed, that Mr. Belly acted according to a superior order to arouse the public opinion against the United States. The President's message gives the pretext for it. The United States are represented as deadly enemies of the whole Latin Race and of the monarchies of Europe, which must fall to their feet, if that race does not commence a crusade against the heretics, and take the sword against the pirates, thieves and bankrupts of the United States."

Not having the original of the pamphlet and giving the following passages in a free translation from the German translation which appeared in the above quoted number of the Democrat, I may be excused by those who have the French pamphlet at hand, if they should find any deviation from it. Monsieur Belly writes besides other things also:

"The longing of the United States for Cuba and Mexico has not only the tendency to enlarge their territory and their interests, but they act besides this, according to a principle, which is diametrically opposite to that of France; they do not care about any civilization beyond their frontier; they have made alliance with all who are filled with hatred against the European politics. When the Democratic Republic obtains the supremacy in the new world, all empires and kingdoms in the world will become inimical to its interests and therefore it will be consequent and necessary to destroy them either by art or by force.... Our commerce, our industry will be compelled to obey instead of being the rulers, and the discovery of the new world will lead to the remarkable result of having occasioned the death of the old.

"The Catholic sovereigns constituted by God and by their subjects, are obliged to introduce such circumstances as to carry into execution their legitimate claims. And those who have been elected by a band without discipline, by bankrupts and thieves, dare to declare publicly, that the hour has come for these thieves and bankrupts to attack the civilized world! are we not as much devoted to the truth, as they are to the lie? We should not delay to promote our system of salvation, while we are discussing their system of perdition. And whereas they are elevating the crime to their religion with more energy than we do our holy religion, while we appear to surrender it, we will henceforth extol the cross and draw the sword, and unite the Latin race to the alliance, without which there is no salvation for civilization....