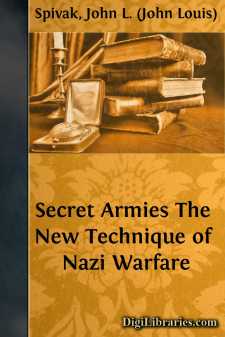 Add to My Favorites
Published: 8 years ago
Downloads: 56
Rating: (0 Votes)

The material in this small volume just barely scratches the surface of a problem which is becoming increasingly grave: the activities of Nazi agents in the United States, Mexico, and Central America. During the past five years I have observed some of them, watching the original, crudely organized and directed propaganda machine develop, grow and leave an influence far wider than most people seem to realize. What at first appeared to be merely a distasteful attempt by Nazi Government officials at direct interference in the affairs of the American people and their Government, has now assumed the more sinister aspect of also seeking American naval and military secrets.

Further studies in Central America, Mexico and the Panama Canal Zone disclosed an espionage network directed by the Rome-Berlin-Tokyo axis and operating against the peace and security of the United States. A scrutiny of the Nazi Fifth Column in a few European countries, especially in Czechoslovakia just before that Republic was turned over to Germany's mercy by the Munich "peace" and in France where Nazi and Italian agents built an amazing secret underground army, has made the fascist activities in the Western Hemisphere somewhat clearer to me.

I have included one chapter detailing events which cannot, so far as I have been able to discover, be traced directly to Nazi espionage; but it shows the influence of Nazi ideology upon England's now notorious "Cliveden set," which maneuvered the betrayal of Austria, sacrificed Czechoslovakia and is working in devious ways to strengthen Hitler in Europe. The "Cliveden set" has already had so profound an effect upon the growth and influence of fascism throughout the world, that I thought it advisable to include it.

The sources for most of the material, by its very nature, naturally cannot be revealed. Those conversations which I quote directly came from people who were present when they occurred or, as in the case of the Cagoulards in France, from official records. In the chapter on Czechoslovakia I quote a conversation between a Nazi spy and his chief. The details came to me from a source which in the past I had found accurate. Subsequently, the spy was arrested by Czech secret police, and his confession substantiated the conversation as I have given it.

Much of the material in this volume has been published in various periodicals from time to time, but so many Americans feel that concern over Nazi penetration in this country is exaggerated, that I hope even this brief and incomplete picture will serve to impress the reader, as it has impressed me, with the gravity of the situation.

When the Spanish Insurgents were investing Madrid early in November, 1936, newspaper correspondents asked Insurgent General Emilio Mola which of his four columns would take the city. Mola replied enigmatically: "The Fifth Column." He referred to the fascist sympathizers within Madrid—those attempting to abet the defeat of the Spanish Government by means of spying, sabotage and terrorism....