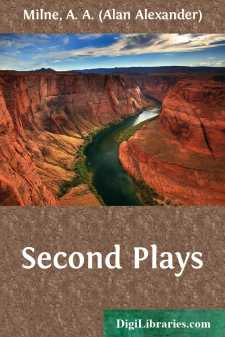 Encouraged by the reviewer who announced that the Introduction to my previous collection of plays was the best part of the book, I venture to introduce this collection in a similar manner. But I shall be careful not to overdo it this time, in the hope that I may win from my critic some such tribute as, "Mr. Milne has certainly improved as a dramatist, in that his plays are now slightly better than his Introduction."

Since, then, I am trying to make this preface as distasteful as possible, in order that the plays may shine out the more pleasantly, I shall begin (how better?) with an attack on the dramatic critics. I will relate a little conversation which took place, shortly after the publication of "First Plays," between myself and a very much more eminent dramatist.

EMINENT DRAMATIST (kindly) Your book seems to have been well reviewed.

MYSELF (ungratefully). Not bad—by those who reviewed it. But I doubt if it was noticed by more than three regular dramatic critics. And considering that two of the plays in it had never been produced—

EMINENT DRAMATIST (amused by my innocence). My dear fellow, you needn't complain. I published an unproduced play a little while ago, and it didn't get a single notice from anybody.

Now I hope that, however slightly the conversations in the plays which follow may move the dramatic critic, he will at least be disturbed by this little dialogue. All of us who are interested in the theatre are accustomed to read, and sometimes to make, ridiculous accusations against the Theatrical Manager. We condemn the mercenary fellow because he will not risk a loss of two or three thousand pounds on the intellectual masterpiece of a promising young dramatist, preferring to put on some contemptible but popular rubbish which is certain to fill his theatre. But now we see that the dramatic critic, that stern upholder of the best interests of the British Drama, will not himself risk six shillings (and perhaps two or three hours of his time) in order to read the intellectual masterpiece of the promising young dramatist, and so to be able to tell us with authority whether the Manager really is refusing masterpieces or no. He will not risk six shillings in order to encourage that promising young dramatist—discouraged enough already, poor devil, in his hopes of fame and fortune—by telling him that he is right, and that his plays are worth something, or (alternatively) to prevent him from wasting any more of his youth upon an art-form to which he is not suited. No, he will not risk his shillings; but he will write an important (and, let us hope, well-rewarded) article, informing us that the British Drama is going to the dogs, and that no promising young dramatist is ever given a fair chance.

Let us consider this young dramatist for a moment, and ask ourselves why he goes on writing his masterpieces. I give three reasons—in their order of importance.

(1) The pleasure of writing; or, more accurately, the hell of not writing....