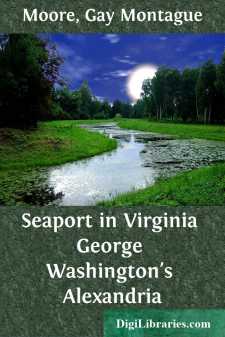 In the middle of the seventeenth century when the English King, Charles II, was generously settling Virginia land upon loyal subjects, what is now the port of Alexandria was part of six thousand acres granted by the Royal Governor, Sir William Berkeley, in the name of His Majesty, to Robert Howsing. The grant was made in 1669 as a reward for bringing into the colony one hundred and twenty persons "to inhabit."

Howsing did not want this land but John Alexander did. He had surveyed the tract and knew its worth. Howsing doubtless thought himself well out of it when Alexander paid six hundredweight of tobacco and took it off his hands within a month.

The growth and development of the colony of Virginia into a great agricultural population occupied in the cultivation of tobacco was not at all what the London Company had in mind. It visualized a colony of towns. But the possibilities offered by the great rivers emptying into Chesapeake Bay and the development of the tobacco trade were responsible for a civilization unique to Englishmen. True that the establishment of towns as trading centers was a recognized need—generally agitated by the Burgesses and planters from interested motives—but little came of it. Planters whose lands and domiciles lined the Virginia waterways found the direct trade with English ships a facile, if expensive, convenience. It was so easy to dispose of a cargo of tobacco and receive at one's door in return delivery of a neat London sofa, greatcoat, or a coach and harness. So instead of towns, great tobacco warehouses were built at convenient centers where tobacco was collected, inspected, and shipped. Such a warehouse was established by act of Assembly in 1730 and 1732 at the mouth of Great Hunting Creek, where it empties into the Potomac River, on the land of Hugh West, Sr. (a member of the Alexander clan) and where there was already a ferry to the Maryland side of the river. Almost immediately a little village grew up—a group of small houses and a school—known then as Belle Haven.

Tobacco was currency in the colony, tendered as such, and it constituted the first wealth. Salaries and fees were paid in tobacco, fines were levied in tobacco; it was the medium of exchange in England as well as in Virginia. When the colonists wrote the word, they used a capital T!

His Majesty's government of the New World was much occupied with the cultivation, housing, and transportation of this natural weed. The importance attached to tobacco is best illustrated by a most extraordinary law. When Englishmen, whose homes are their castles, permitted the right of search of citizens' private dwellings, some idea of the value of this commodity may be realized. The Burgesses resolved early "that any Justice of Peace who shall know or be informed of any Package of Tobacco of less than——weight made up for shipping off, shall have power to enter any suspected House, and by night or by day and so search for, and finding any such Package, to seize and destroy the same; and moreover the Person in whose Possession the same shall be found, shall be liable to a Penalty." Inspectors of tobacco held their appointments under the King; theirs was the responsibility of watching the crop, estimating its yield and weight, maintaining the standard of quality and inspecting the packing....