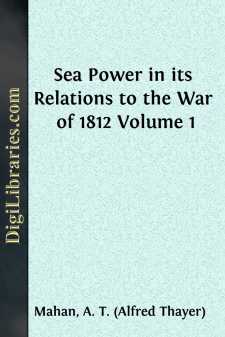 The present work concludes the series of "The Influence of Sea Power upon History," as originally framed in the conception of the author. In the previous volumes he has had the inspiring consciousness of regarding his subject as a positive and commanding element in the history of the world. In the War of 1812, also, the effect is real and dread enough; but to his own country, to the United States, as a matter of national experience, the lesson is rather that of the influence of a negative quantity upon national history. The phrase scarcely lends itself to use as a title; but it represents the truth which the author has endeavored to set forth, though recognizing clearly that the victories on Lake Erie and Lake Champlain do illustrate, in a distinguished manner, his principal thesis, the controlling influence upon events of naval power, even when transferred to an inland body of fresh water. The lesson there, however, was the same as in the larger fields of war heretofore treated. Not by rambling operations, or naval duels, are wars decided, but by force massed, and handled in skilful combination. It matters not that the particular force be small. The art of war is the same throughout; and may be illustrated as really, though less conspicuously, by a flotilla as by an armada; by a corporal's guard, or the three units of the Horatii, as by a host of a hundred thousand.

The interest of the War of 1812, to Americans, has commonly been felt to lie in the brilliant evidence of high professional tone and efficiency reached by their navy, as shown by the single-ship actions, and by the two decisive victories achieved by little squadrons upon the lakes. Without in the least overlooking the permanent value of such examples and such traditions, to the nation, and to the military service which they illustrate, it nevertheless appears to the writer that the effect may be even harmful to the people at large, if it be permitted to conceal the deeply mortifying condition to which the country was reduced by parsimony in preparation, or to obscure the lessons thence to be drawn for practical application now. It is perhaps useless to quarrel with the tendency of mankind to turn its eyes from disagreeable subjects, and to dwell complacently upon those which minister to self-content. We mostly read the newspapers in which we find our views reflected, and dispense ourselves easily with the less pleasing occupation of seeing them roughly disputed; but a writer on a subject of national importance may not thus exempt himself from the unpleasant features of his task.

The author has thought it also essential to precede his work by a somewhat full exposition of the train of causes, which through a long series of years led to the war. It may seem at first far-fetched to go back to 1651 for the origins of the War of 1812; but without such preliminary consideration it is impossible to understand, or to make due allowance for, the course of Great Britain. It will be found, however, that the treatment of the earlier period is brief, and only sufficient for a clear comprehension of the five years of intense international strain preceding the final rupture; years the full narrative of which is indispensable to appreciating the grounds and development of the quarrel,—to realize what they fought each other for....