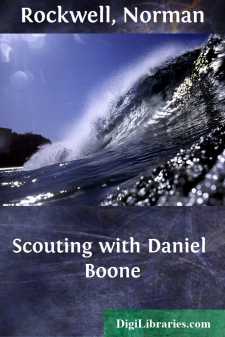 Perhaps not unnaturally in certain details there is a slight confusion or divergence in the various works that recount the heroic deeds of Daniel Boone. The men of that day were making history rather than recording what they did. There is, however, a striking uniformity in all the records as to the simple faith and almost fatalistic conviction of Daniel Boone that he was called to be a pathfinder for the new nation in America. His courage, reverence, rugged honesty, and unselfishness, his childlike simplicity that was mixed with a certain shrewdness, at least in his dealings with the Indians, are, however, qualities in which the historians mostly agree.

I have cast this record into story form and have used the license of a story-teller. I have incorporated a few adventures on the border which strictly do not belong to this tale. Every one of them, however, is true, and I hope will help in giving a true picture of those early and trying days.

In the midst of it all I have placed the great scout. The qualities he displayed are the same that are necessary for success in our day or any day. The problems may vary from generation to generation, but the elements of true manhood are ever the same.

I have made free use of the many historical works which portray the character of the great scout.

First of all is the diary of Daniel Boone himself. In addition to that fascinating story, the following works also should be read by those who are interested in his life:

"The Adventures of Colonel Daniel Boone," by General Filson;

"Life of Boone," by Timothy Flint;

"Daniel Boone and the Hunters of Kentucky," by W. H. Bogart;

"The Adventures of Daniel Boone, the Kentucky Rifleman," by the author of "Uncle Philip's Conversations ";

The various publications of the Filson Club of Louisville, Kentucky, have also been helpful. "The Siege of Bryant's Station," by the President of the Club, Colonel Reuben Durrett, and "The Battle of Blue Licks," by Colonel Bennett H. Young, are most interesting.

McClung's "Sketches of Western Adventure," and Strickland's "Pioneers of the West" have provided many interesting details. The author also gratefully acknowledges the aid he has had from some of the lineal descendants of Boone himself.

If English boys are eager to hear about the heroic adventures of King Arthur, Robin Hood, and other characters, in part at least legendary, why should not American boys be equally interested in the true stories of the rugged heroes of their own land?

There never has been a time when the development of a true patriotism was more needed than it is to-day. Our perils and problems are not concerned with savages and wild beasts, but they may be no less dangerous than those which confronted our forefathers. How to meet them, what qualities ought to be strengthened in the life of an American boy, how best to inspire the younger generation with love and devotion for our country, are vital questions of the present....