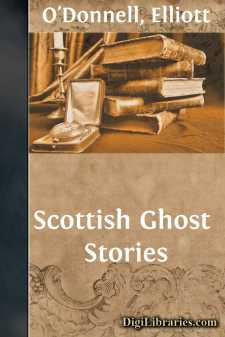 CASE I THE DEATH BOGLE OF THE CROSS ROADS, AND THE INEXTINGUISHABLE CANDLE OF THE OLD WHITE HOUSE, PITLOCHRY

Several years ago, bent on revisiting Perthshire, a locality which had great attractions for me as a boy, I answered an advertisement in a popular ladies' weekly. As far as I can recollect, it was somewhat to this effect: "Comfortable home offered to a gentleman (a bachelor) at moderate terms in an elderly Highland lady's house at Pitlochry. Must be a strict teetotaller and non-smoker. F.M., Box so-and-so."

The naïveté and originality of the advertisement pleased me. The idea of obtaining as a boarder a young man combining such virtues as abstinence from alcohol and tobacco amused me vastly. And then a bachelor, too! Did she mean to make love to him herself? The sly old thing! She took care to insert the epithet "elderly," in order to avoid suspicion; and there was no doubt about it—she thirsted for matrimony. Being "tabooed" by all the men who had even as much as caught a passing glimpse of her, this was her last resource—she would entrap some unwary stranger, a man with money of course, and inveigle him into marrying her. And there rose up before me visions of a tall, angular, forty-year-old Scottish spinster, with high cheek-bones, virulent, sandy hair, and brawny arms—the sort of woman that ought not to have been a woman at all—the sort that sets all my teeth on edge. Yet it was Pitlochry, heavenly Pitlochry, and there was no one else advertising in that town. That I should suit her in every respect but the matrimonial, I did not doubt. I can pass muster in any company as a teetotaller; I abominate tobacco (leastways it abominates me, which amounts to much about the same thing), and I am, or rather I can be, tolerably amenable, if my surroundings are not positively infernal, and there are no County Council children within shooting distance.

But for once my instincts were all wrong. The advertiser—a Miss Flora Macdonald of "Donald Murray House"—did not resemble my preconception of her in any respect. She was of medium height, and dainty build—a fairy-like creature clad in rustling silks, with wavy, white hair, bright, blue eyes, straight, delicate features, and hands, the shape and slenderness of which at once pronounced her a psychic. She greeted me with all the stately courtesy of the Old School; my portmanteau was taken upstairs by a solemn-eyed lad in the Macdonald tartan; and the tea bell rang me down to a most appetising repast of strawberries and cream, scones, and delicious buttered toast. I fell in love with my hostess—it would be sheer sacrilege to designate such a divine creature by the vulgar term of "landlady"—at once. When one's impressions of a place are at first exalted, they are often, later on, apt to become equally abased. In this case, however, it was otherwise. My appreciation both of Miss Flora Macdonald and of her house daily increased. The food was all that could be desired, and my bedroom, sweet with the perfume of jasmine and roses, presented such a picture of dainty cleanliness, as awakened in me feelings of shame, that it should be defiled by all my dusty, travel-worn accoutrements....