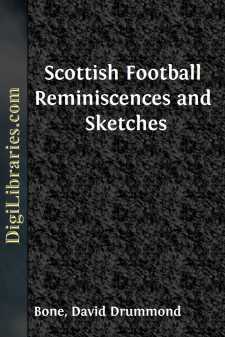 I.—FOOTBALL: ANCIENT AND MODERN. "Then strip, lads and to it, though cold be the weather,And if, by mischance you should happen to fall,There are worse things in life than a tumble on heather,For life is itself but a game at Football."—Sir Walter Scott.

In Scotland, so closely associated with traditional lore, and the acknowledged birth-place of romance and patriotic song, it would be almost dangerous to incur displeasure by attempting to refer to the early history of anything associated with the amusements or recreations of the people, without actually touching on tradition—a point held by some in far greater regard and reverence than actual fact. Under these circumstances, then, I do not want to run the risk of complete annihilation by ignoring the traditional, and even territorial, aspect of Football. That the game was played as early as the tenth century there is any amount of authentic evidence to show, and that it continued to be one of the chief recreations of the people there can be no doubt. Coming much further down, however, the game of Football is referred to, both by historical and romance writers. In Sir Walter Scott's "Lay of the Last Minstrel," we find that the English and Scotch soldiers, in a few hours' actual cessation from skirmishing on the eve of a battle, engaged in "the merry Football play." Our forefathers, however, must have played the game in rather a rude and undignified fashion, if we can believe certain authorities—actual brute force and superiority in point of weight being the indispensable concomitants of a successful side. The matches, too, must have been played utterly regardless of science. Just fancy a couple of crack teams meeting on a heather-covered field, with the "hailing spots" about a mile and a-half apart, and playing a match lasting four or five hours! Could any of our young men nowadays stand such rough-and-tumble work? Happily it is not required. It has been found that a match lasting an hour and a-half, with the ball ever and anon passing in front of one on a level field, is quite enough, even for the strongest back, half-back, or forward. Experience has sufficiently proved that, even in this age of scientific play. So much for the past, and I will proceed to touch briefly on the spread and popularity of football.

To those who only know football as promoted by the Queen's Park, and subsequently by the Vale of Leven, Clydesdale, Granville (now defunct), 3rd L.R.V, and lastly, though not leastly, by the Scottish Football Association, we are almost compelled to offer some information. A quarter of a century ago a Union was formed in Edinburgh to draw up a code of rules to encourage the game of Football, and matches were played between schools and other clubs. These rules were a combination of the present Association and Rugby, dribbling being largely indulged in, but the goal-posts were similar to those now in use under the latter code of rules, and a goal could not be scored unless the ball went over the posts. This game made considerable progress in Edinburgh, being vigorously promoted by scholastic clubs and students attending college....