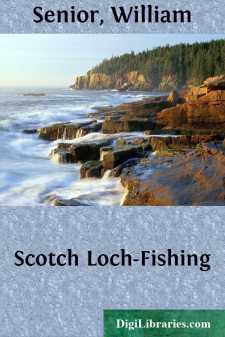 We do not pretend to write or enlarge upon a new subject. Much has been said and written—and well said and written too—on the art of fishing; but loch-fishing per se has been rather looked upon as a second-rate performance, and to dispel this idea is one of the objects for which this present treatise has been written. Far be it from us to say anything against fishing, lawfully practised in any form; but many pent up in our large towns will bear us out when we say that, on the whole, a day's loch-fishing is the most convenient. One great matter is, that the loch-fisher is dependent on nothing but enough wind to "curl" the water,—and on a large loch it is very seldom that a dead calm prevails all day,—and can make his arrangements for a day, weeks beforehand; whereas the stream-fisher is dependent for a good take on the state of the water: and however pleasant and easy it may be for one living near the banks of a good trout stream or river, it is quite another matter to arrange for a day's river-fishing, if one is looking forward to a holiday at a date some weeks ahead. Providence may favour the expectant angler with a "good" day, and the water in order; but experience has taught most of us that the "good" days are in the minority, and that, as is the case with our rapid running streams,—such as many of our northern streams are,—the water is either too large or too small, unless, as previously remarked, you live near at hand, and can catch it at its best.

A common belief in regard to loch-fishing is, that the tyro and the experienced angler have nearly the same chance in fishing,—the one from the stern and the other from the bow of the same boat. Of all the absurd beliefs as to loch-fishing, this is one of the most absurd. Try it. Give the tyro either end of the boat he likes; give him a cast of any flies he may fancy, or even a cast similar to those which a "crack" may be using; and if he catches one for every three the other has, he may consider himself very lucky. Of course there are lochs where the fish are not abundant, and a beginner may come across as many as an older fisher; but we speak of lochs where there are fish to be caught, and where each has a fair chance.

Again, it is said that the boatman has as much to do with catching trout in a loch as the angler. Well, we don't deny that. In an untried loch it is necessary to have the guidance of a good boatman; but the same argument holds good as to stream-fishing. There are "pools and pools," and the experienced loch-fisher can "spot" a bay or promontory, where trout are likely to be lying, with as much certainty as his brother angler can calculate on the lie of fish in a stream. Then there are objections to loch-fishing on the score of expense. These we are not prepared to refute; for there is no doubt whatever that loch-fishing means money. But what has made it so? The same reason that makes all other things of more or less value—the common law of supply and demand. Time was, and that not so long ago, when a boatman who used to get 3s., or at most 4s....