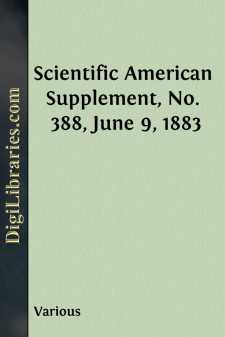 In a preceding article, we have described a ventilator which is in use at the Decazeville coal mines, and which is capable of furnishing, per second, 20 cubic meters of air whose pressure must be able to vary between 30 and 80 millimeters.

In order to actuate such an apparatus, it was necessary to have a motor that was possessed of great elasticity, and that nevertheless presented no complications incompatible with the application that was to be made of it.

In the ventilation of mines it has been demonstrated that the theoretic power in kilogrammes necessary to displace a certain number of cubic meters of air, at a pressure expressed in millimeters of water, is obtained by multiplying one number by the other. Applying this rule to the case of 20 cubic meters under a hydrostatic pressure of 30 millimeters, we find:

In the case of a pressure of 80 millimeters, we have:

If we admit a product of 50 per cent., we shall have in the two cases, for the power actually necessary:

Such are the limits within which the power of the motor should be able to vary.

After successively examining all the different systems of engines now in existence, and finding none which, in a plain form, was capable of fulfilling the conditions imposed, Mr. E.D. Farcot decided to study out one for himself. Almost from the very beginning of his researches in this direction, he adopted the Woolf system, which is one that permits of great variation in the expansion, and one in which the steam under full pressure acts only upon the small piston. There are many types of this engine in use, all of which present marked defects. In one of them, the large cylinder is arranged directly over the small one so as to have but a single rod for the two pistons; and the two cylinders have then one bottom in common, which is furnished with a stuffing-box in which the rod moves. With this arrangement we have but a single connecting rod and a single crank for the shaft; but, the stuffing-box not being accessible so that it can be kept in a clean state, there occur after a time both leakages of steam and entrances of air.

Mr. Farcot has further simplified this last named type by suppressing the intermediate partition, and consequently the stuffing-box. The engine thus becomes direct acting, that is to say, the steam acts first upon the lower surface of the small piston during its ascent, and afterward expands in the large cylinder and exerts its pressure upon the upper surface of the large piston during its descent. Moreover, the expansion may be begun in the small cylinder, thanks to the use of a slide plate distributing valve, devised by the elder Farcot and slightly modified by the son.

As the volume comprised between the two pistons varies with the position of the latter, annoying counter-pressures might result therefrom had not care been taken to put the chamber in communication with a reservoir of ten times greater capacity, and which is formed by the interior of the frame. This brings about an almost constant counter-pressure.

The type of motor under consideration, which we represent in the accompanying plate, is possessed of remarkable simplicity. The number of parts is reduced to the extremest limits; it works at high speed without perceptible wear; it does not require those frequent repairs that many other cheap engines do; and the expansion of the steam is utilized without occasioning violent shocks in the parts which transmit motion. Finally, the plainness of the whole apparatus is perfectly in accordance with the uses for which it was devised.

The frame, which is of cast iron and entirely hollow, consists of two uprights, B, connected at their upper part by a sort of cap, B¹, which is cast in a piece with the two cylinders, C and c. The whole rests upon a base, B², which is itself bolted to the masonry foundation.

Each of the uprights is provided internally with projecting pieces for receiving the guides between which slides the cross-head, g, of the piston rod. The slides terminate in two lubricating cups designed for oiling the surfaces submitted to friction.

The cross-head carries two bearings, g¹, to which is jointed the forked extremity, D, of the connecting rod, whose opposite extremity receives a strap that embraces the cranked end of the driving shaft, A. It will be remarked that the crank, A¹, and the bearings, g¹, are very long. The end the inventor had in view in constructing them thus was to diminish friction.

To the shaft, A, are keyed the coupling disks, Q, which are cast solid at a portion of their circumference situated at 180° with respect to the parts, A², of the cranked shaft, the object of this being to balance the latter as well as a portion of the connecting rod, D.

The shaft, A, also receives the eccentric, E, of the slide valve, the rod, e, of which is jointed to the slide valve rod through the intermedium of a cross-head, e¹, analogous to that of the pistons, and which, like the latter, runs on guides held by the support, b.

The two pistons, p and P, are mounted very simply on the rod, T, as shown in Fig. 1, and slide in cylinders, c and C, whose diameters are respectively equal to 270 and 470 millimeters.

The slide valve box, F, is bolted to the cap-piece, B¹, as seen in Fig. 4. As for the slide valve, t, its arrangement may be distinguished in section in Fig. 2. Its eccentric is keyed at 170° so as to admit steam into the small cylinder during the entire travel, which latter is 470 mm.

To permit of the expansion beginning in the small cylinder, Mr. Farcot has added a sliding plate, t¹, which abuts at every stroke against the stops, s. These latter are affixed to the rod, S, whose lower extremity is threaded, and which may be moved vertically, as slightly as may be desired, through the medium of the pinions, S¹, when the hand-wheel, V, is revolved. A datum point, v, and a graduated socket, v¹, allow the position of the stops, s, and consequently the degree of expansion, to be known.