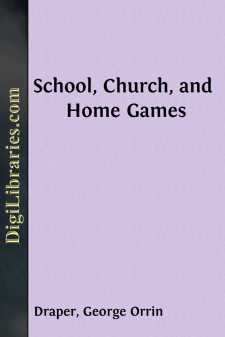 One pupil is designated to play the role of cat, another that of mouse. The mouse can escape the cat by sitting in the seat with some other pupil. Thereupon that pupil becomes mouse. Should the cat tag a mouse before it sits in a seat, the mouse becomes cat and the cat becomes mouse, and the latter must get into a seat to avoid being tagged.

The pupils sit or stand in a circle with their hands in front of them, palms together. The one who has been selected to be "It" takes a position in the center of the circle, with his hands in a similar position. A button is held between his hands. He goes around the circle and places his hand over those of various individuals, dropping the button into the hands of one. He continues about the circle, still making the motions of dropping the button in the hands of others, so as to deceive those making up the ring. After he has taken his place in the center of the circle, those in the ring endeavor to guess into whose hands he has dropped the button, the one succeeding in doing this takes the button and continues the game.

Some object is determined upon for hiding, such as a coin, a button, a thimble, etc. A pupil is sent from the room. During his absence the object is hidden. Upon his return the children buzz vigorously when he is near to the object sought and very faintly when he is some distance away. The object is located by the intensity of the buzzing.

In this game all of the pupils except one are sent from the room. The one left in the room hides a coin, or some similar object, somewhere in plain sight. It must be visible without having to move any object. When hidden, the rest of the pupils are called back and start the search. When a pupil finds the coin, after attempting to mislead the others by continuing his search in different quarters, he returns to his seat without disclosing its whereabouts. As it is found by others, the group of seekers will gradually diminish until there is but one left. When he finds it, the coin is again hidden by the one first finding it.

A certain color is determined upon. Each pupil in turn must name some object which is of that color. Failing to do this he goes to the foot of the line, provided some one beyond him can think of any object of that color. If no more objects can be thought of, a new color is selected.

One pupil is given the privilege of thinking of some object in the room, of which he discloses the color to the rest of the pupils....