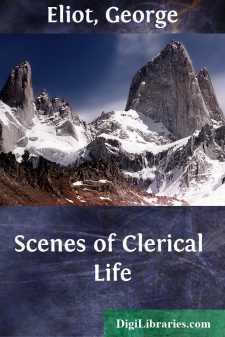 George Eliot, or Mary Ann Evans, was born at Arbury Farm, in the parish of Chilvers Coton, Warwickshire, on the 22nd of November, 1819. She was the fifth and last child of her father by his second wife—of that father whose sound sense and integrity she so keenly appreciated, and who was to a certain extent the original of her famous characters of Adam Bede and Caleb Garth.

Both during and after her schooldays George Eliot's history was that of a mind continually out-growing its conditions. She became an excellent housewife and a devoted daughter, but her nature was too large for so cramped a life. 'You may try,' she writes in Daniel Deronda, 'but you can never imagine what it is to have a man's force of genius in you, and to suffer the slavery of being a girl.'

While her powers were growing she necessarily passed through many phases. She became deeply religious, and wrote poetry, pious and sweet, fair of its kind. Music was a passion with her; in a characteristic letter written at the age of twenty to a friend she tries but fails to describe her experience on hearing the 'Messiah' of Birmingham: 'With a stupid, drowsy sensation, produced by standing sentinel over damson cheese and a warm stove, I cannot do better than ask you to read, if accessible, Wordsworth's short poem on the "Power of Sound."' There you have a concise history of George Eliot's life at this period, divided as it was between music, literature, and damson cheese.

Sixteen years of mental work and effort then lay between her and her first achievement; years during which she read industriously and thought more than she read. The classics, French, German, and Italian literature, she laid them all under contribution. She had besides the art of fortunate friendship: her mind naturally chose out the greater intelligences among those she encountered; it was through a warm and enduring friendship with Herbert Spencer that she met at last with George Henry Lewes whose wife she became.

In this way she served no trifling apprenticeship. Natural genius, experience of life, culture, and great companionship had joined to make her what she was, a philosopher both natural and developed; and, what is more rare, a philosopher with a sense of humour and a perception of the dramatic. Thus when her chance came she was fully equipped to meet it.

It came when, at the age of thirty-six she began to write 'Amos Barton,' her first attempt at fiction, and one that fixed her career. The story appeared in 'Blackwood's Magazine,' and was followed by 'Mr. Gilfil's Love Story' and 'Janet's Repentance.' Of the three, 'Mr. Gilfil's Love Story' is perhaps the most finished and artistic; while 'Amos Barton' has qualities of humour and tenderness that have not often been equalled. 'Janet's Repentance,' strong though it is, and containing the remarkable sketch of Mr. Tryan, is perhaps less surely attractive.

The stories, all three of them, have a particular value as records of an English country life that is rapidly passing away....