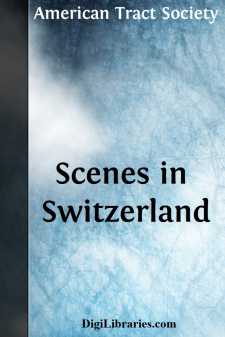 Time flies swiftly when we are sightseeing; and it was late in the autumn of 18— when I reached Lindau. Lake Constance lay before me, a pale, green sheet of water, hemmed in on the south by bold mountain ranges, filling the interim between the Rhine valley and the long undulating ridges of the Canton Thurgau. These heights, cleft at intervals by green smiling valleys and deep ravines, are only the front of table-land stretching away like an inclined plane, and dotted with scattered houses and cloistering villages. The deep green of forest and pasture land was beginning to show the touch of autumn's pencil; the bright hues striking against gray, rocky walls; the topmost edge of each successive elevation crowned with a sharp outline of golden light, deepening the purple gloom of the shaded slopes.

Behind and over this region towers the Sentis, its brow of snow bristling with spear points. It was altogether too late to think of the Baths, or even to look at the little lake of Wallenstatt; and still, I was unwilling to return without a friendly shake of the hand of my old friend Spruner, who had perched himself in one of the upper cantons. "You should have been here earlier," said the landlord; "in summer we have plenty of visitors."

"I rather look upon the mountains in their parti-colored vests, than when dressed in simple green," I replied.

"If you can stand the weather;" and he thrust his pipe deeper into his mouth, and twirled the button of his coat.

Hastily making my adieus, the postillion cracked his whip, and we started. "There is no danger of bad weather for a month," said the driver, "and when we get up farther you will see what will pay you for the trouble of coming:" a speech that promised well for the day, I argued; and a certain share of respect leaped up for the man in his laced coat and steeple-crowned hat. A good specimen of his class—and once satisfied of this, I gave myself up to the present, without the least foreboding with regard to the future.

Over us hung masses of gray cloud, stretching across the valley like a curtain, and falling in voluminous folds almost to the level of Lake Constance. As we passed through this belt, and came out, with cloud and mist below us, I listened as the postillion related the popular legends handed down from one generation to another, for the last six hundred years. Reaching the crest of the topmost height, he stopped suddenly.

"It is just the day to see the herdsmen;" and he threw down the reins, and prepared to dismount. I stood up and looked around.

"The battle you know between the herdsmen and the monks, with Austria to help. It was a hard battle, and the knights were whipped; and ever since, on certain days, the herdsmen are seen armed with bows and pikes," he continued. By this time I had taken in his meaning, and turning my attention to the misty curtain rolling up into clouds about the sides of the mountain, I had no difficulty in picturing the discomfited Austrians flying from the pursuit of the hardy mountaineers....