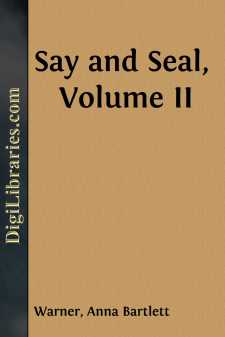 So came the holiday week, wherein was to be done so much less than usual—and so much more. Mr. Linden's work, indeed, was like to double on all hands; for he was threatened with more tea-drinkings, dinners, suppers, and frolics, than the week would hold. How should he manage to give everybody a piece of him, and likewise present himself entire to the assembled boys when ever they chose to assemble?—which promised to be pretty often. How should he go skating, sliding, and sleigh-riding, at all hours of the day and night, and yet spend all those hours where he wanted to spend them? It was a grave question; and not easy, as he remarked to Faith, to hold so many feelings in his hands and hurt none of them. So with the question yet undecided, Christmas day came.

It was a brilliant day—all white and blue; the sky like a sapphire, the earth like a pearl; the sunbeams burnished gold.

"Ha' ye but seen the light fall of the snow,   Before the soil hath smutched it?"—

Such was Pattaquasset, Christmas morning. And the bright lily,

"Before rude hands have touched it,"

that was Faith Derrick when she came down stairs. The dainty little crimson silk hood which Mrs. Derrick had quilted for her, was in her hand, brought down for display; but at present the sitting-room was empty, and Faith passed on to her work-basket, to put the hood in safe keeping. She found a pre-occupied basket. At some unknown hour of the night, Santa Claus had come and left upon it his mark in the shape of a package: a rather large and rather thin package, but done up with that infallible brown paper and small cord which everybody knows by instinct. Who ever looked twice at a parcel from that wagon, and doubted whence it came?

Faith's cheeks took an additional tinge, quite as brilliant as if the crimson hood had been on. What doubtful fingers lifted the package from the basket!

The thing—whatever it was—had been done up carefully. Beneath the brown paper a white one revealed itself, beneath that a red leather portfolio—made in the pretty old-fashioned style, and securing its contents by means of its red leather tongue. But when Faith had withdrawn this, and with the caution always exercised on such occasions had also drawn out the contents, she found the prettiest continuation of her Italian journey, in the shape of very fine photographs of all sorts of Italian places and things, mingled with here and there an excursion into the Swiss mountains.

A few almost awe-stricken glances Faith gave; then she put the photographs in the portfolio again, scarcely seen, and looked at the outside of the red leather; felt of its smooth surface with admiring fingers that hardly believed what they touched, and a face glowing with a very deep glow by this time. Faith thought herself rich, beyond the imagination of a millionaire. But after a little mute amazed consideration of her happiness, she rushed off to the kitchen to signalize the Christmas breakfast—and perhaps spend a few of her too many thoughts—by the preparation and production of one of Madame Danforth's nice, but in Pattaquasset unheard of, delicacies; and when all the rest of the breakfast was ready, Faith demurely went in with her dish....