Say and Seal, Volume I 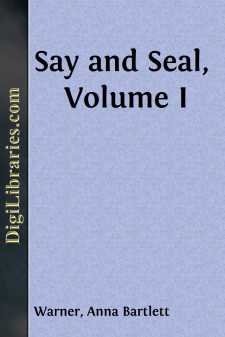 The street was broad, with sidewalks, and wide grass-grown borders, and a spacious track of wheels and horses' feet in the centre. Great elms, which the early settlers planted, waved their pendant branches over the peaceful highway, and gave shelter and nest-room to numerous orioles, killdeer, and robins; putting off their yellow leaves in the autumn, and bearing their winter weight of snow, in seeming quiet assurance that spring would make amends for all. So slept the early settlers in the churchyard!

Along the street, at pleasant neighbourly intervals—not near enough to be crowded, nor far enough to be lonely—stood the houses,—comfortable, spacious, compact,—"with no nonsense about them." The Mong lay like a mere blue thread in the distance, its course often pointed out by the gaff of some little sloop that followed the bends of the river up toward Suckiaug. The low rolling shore was spotted with towns and spires: over all was spread the fairest blue sky and floating specks of white.

Not many sounds were astir,—the robins whistled, thief-like, over the cherry-trees; the killdeer, from some high twig, sent forth his sweet clear note; and now and then a pair of wheels rolled softly along the smooth road: the rush of the wind filled up the pauses. Anybody who was down by the Mong might have heard the soft roll of his blue waters,—any one by the light-house might have heard the harsher dash of the salt waves.

I might go on, and say that if anybody had been looking out of Mrs. Derrick's window he or she might have seen—what Mrs. Derrick really saw! For she was looking out of the window (or rather through the blind) at the critical moment that afternoon. It would be too much to say that she placed herself there on purpose,—let the reader suppose what he likes.

At the time, then, that the village clock was striking four, when meditative cows were examining the length of their shadows, and all the geese were setting forth for their afternoon swim, a stranger opened Mrs. Derrick's little gate and walked in. Stretching out one hand to the dog in token of good fellowship, (a classical mind might have fancied him breaking the cake by whose help Quickear got past the lions,) he went up the walk, neither fast nor slow, ascended the steps, and gave what Mrs. Derrick called "considerable of a rap" at the door. That done, he faced about and looked at the far off blue Mong.

Not more intently did he eye and read that fair river; not more swiftly did his thoughts pass from the Mong to things beyond human ken; than Mrs. Derrick eyed and read—his back, and suffered her ideas to roam into the far off regions of speculation. The light summer coat, the straw hat, were nothing uncommon; but the silk umbrella was too good for the coat—the gloves and boots altogether extravagant!

"He ain't a bit like the Pattaquasset folks, Faith," she said, in a whisper thrown over her shoulder to her daughter.

Mrs. Derrick replied by an inarticulate sound of interrogation....