Sartor Resartus: the life and opinions of Herr Teufelsdrockh 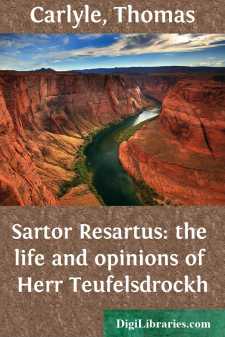 Considering our present advanced state of culture, and how the Torch of Science has now been brandished and borne about, with more or less effect, for five thousand years and upwards; how, in these times especially, not only the Torch still burns, and perhaps more fiercely than ever, but innumerable Rushlights, and Sulphur-matches, kindled thereat, are also glancing in every direction, so that not the smallest cranny or dog-hole in Nature or Art can remain unilluminated,—it might strike the reflective mind with some surprise that hitherto little or nothing of a fundamental character, whether in the way of Philosophy or History, has been written on the subject of Clothes.

Our Theory of Gravitation is as good as perfect: Lagrange, it is well known, has proved that the Planetary System, on this scheme, will endure forever; Laplace, still more cunningly, even guesses that it could not have been made on any other scheme. Whereby, at least, our nautical Logbooks can be better kept; and water-transport of all kinds has grown more commodious. Of Geology and Geognosy we know enough: what with the labors of our Werners and Huttons, what with the ardent genius of their disciples, it has come about that now, to many a Royal Society, the Creation of a World is little more mysterious than the cooking of a dumpling; concerning which last, indeed, there have been minds to whom the question, How the apples were got in, presented difficulties. Why mention our disquisitions on the Social Contract, on the Standard of Taste, on the Migrations of the Herring? Then, have we not a Doctrine of Rent, a Theory of Value; Philosophies of Language, of History, of Pottery, of Apparitions, of Intoxicating Liquors? Man's whole life and environment have been laid open and elucidated; scarcely a fragment or fibre of his Soul, Body, and Possessions, but has been probed, dissected, distilled, desiccated, and scientifically decomposed: our spiritual Faculties, of which it appears there are not a few, have their Stewarts, Cousins, Royer Collards: every cellular, vascular, muscular Tissue glories in its Lawrences, Majendies, Bichats.

How, then, comes it, may the reflective mind repeat, that the grand Tissue of all Tissues, the only real Tissue, should have been quite overlooked by Science,—the vestural Tissue, namely, of woollen or other cloth; which Man's Soul wears as its outmost wrappage and overall; wherein his whole other Tissues are included and screened, his whole Faculties work, his whole Self lives, moves, and has its being? For if, now and then, some straggling broken-winged thinker has cast an owl's glance into this obscure region, the most have soared over it altogether heedless; regarding Clothes as a property, not an accident, as quite natural and spontaneous, like the leaves of trees, like the plumage of birds. In all speculations they have tacitly figured man as a Clothed Animal; whereas he is by nature a Naked Animal; and only in certain circumstances, by purpose and device, masks himself in Clothes....