Sartor Resartus, and On Heroes, Hero-Worship, and the Heroic in History 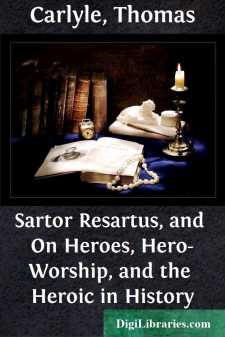 One of the most vital and pregnant books in our modern literature, “Sartor Resartus” is also, in structure and form, one of the most daringly original. It defies exact classification. It is not a philosophic treatise. It is not an autobiography. It is not a romance. Yet in a sense it is all these combined. Its underlying purpose is to expound in broad outline certain ideas which lay at the root of Carlyle’s whole reading of life. But he does not elect to set these forth in regular methodic fashion, after the manner of one writing a systematic essay. He presents his philosophy in dramatic form and in a picturesque human setting. He invents a certain Herr Diogenes Teufelsdröckh, an erudite German professor of “Allerley-Wissenschaft,” or Things in General, in the University of Weissnichtwo, of whose colossal work, “Die Kleider, Ihr Werden und Wirken” (On Clothes: Their Origin and Influence), he represents himself as being only the student and interpreter. With infinite humour he explains how this prodigious volume came into his hands; how he was struck with amazement by its encyclopædic learning, and the depth and suggestiveness of its thought; and how he determined that it was his special mission to introduce its ideas to the British public. But how was this to be done? As a mere bald abstract of the original would never do, the would-be apostle was for a time in despair. But at length the happy thought occurred to him of combining a condensed statement of the main principles of the new philosophy with some account of the philosopher’s life and character. Thus the work took the form of a “Life and Opinions of Herr Teufelsdröckh,” and as such it was offered to the world. Here, of course, we reach the explanation of its fantastic title—“Sartor Resartus,” or the Tailor Patched: the tailor being the great German “Clothes-philosopher,” and the patching being done by Carlyle as his English editor.

As a piece of literary mystification, Teufelsdröckh and his treatise enjoyed a measure of the success which nearly twenty years before had been scored by Dietrich Knickerbocker and his “History of New York.” The question of the professor’s existence was solemnly discussed in at least one important review; Carlyle was gravely taken to task for attempting to mislead the public; a certain interested reader actually wrote to inquire where the original German work was to be obtained. All this seems to us surprising; the more so as we are now able to understand the purposes which Carlyle had in view in devising his dramatic scheme. In the first place, by associating the clothes-philosophy with the personality of its alleged author (himself one of Carlyle’s splendidly living pieces of characterisation), and by presenting it as the product and expression of his spiritual experiences, he made the mystical creed intensely human. Stated in the abstract, it would have been a mere blank -ism; developed in its intimate relations with Teufelsdröckh’s character and career, it is filled with the hot life-blood of natural thought and feeling....