Saratoga and How to See It 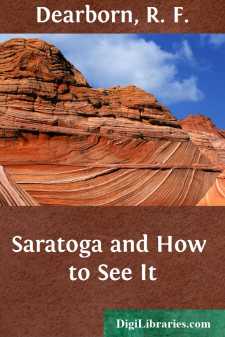 The design of this work is not to give a history of the village of Saratoga. That, as well as a more elaborate description of the geology of the county, may be found in a very interesting book, published several years since, by R.L. Allen, M.D., entitled the "Hand Book of Saratoga and Stranger's Guide." We acknowledge our indebtedness to the work for several items in regard to the history of the Springs.

Our thanks are due also to Prof. C.H. Chandler, Ph.D., of the Columbia School of Mines, for the Analyses of the Springs, and for electroplates and valuable suggestions from the American Chemist, of which he is the distinguished editor.

We would acknowledge here also, the assistance and uniform courtesy which we have received from the Superintendents and officers of the various Springs. The failure of an engraving company to fulfill their agreement has delayed the issue of the work and prevented the insertion of several other engravings.

PART I. The Analysis, History and Properties OF THE MINERAL SPRINGS. THEMineral Springs of Saratoga.

The region of Mineral Springs in Eastern New York consists of a long, shallow and crescent-shaped valley, extending northeast from Ballston, its western horn, to Quaker Springs, its eastern extremity. The entire valley abounds in mineral fountains of more or less merit, and in the central portion bubble up the Waters of Healing, which have given to Saratoga its world-wide celebrity.

Professor Chandler, of the Columbia School of Mines, thus describes the

Geology of the County.

"Beginning with the uppermost, the rocks of Saratoga county are:

1. The Hudson river and Utica shales and slates.

3. The calciferous sand rock, which is a silicious limestone.

4. The Potsdam sand stone; and

5. The Laurentian formation of gneiss and granite, of unknown thickness.

"The most remarkable feature is, however, the break, or vertical fissure, which occurs in the Saratoga valley, which you see indicated in the cut. Notice, especially, the fact that the strata on one side of the fissure have been elevated above their original position, so that the Potsdam sandstone on the left meets the edges of the calciferous sand rock, and even the Trenton limestone on the right. It is in the line of this fissure, or fault, in the towns of Saratoga and Ballston that the springs occur.

"The Laurentian rocks, consisting of highly crystalline gneiss, granite and syenite, are almost impervious, while the overlying Potsdam sandstone is very porous, and capable of holding large quantities of water. In this rock the mineral springs of Saratoga probably have their origin. The surface waters of the Laurentian hills, flowing down over the exposed edges of the Potsdam beds, penetrate the porous sandstones, become saturated with mineral matter, partly derived, perhaps, from the limestones above, and are forced to the surface at a lower level, by hydrostatic pressure. The valley in which the springs all occur indicates the line of a fault or fracture in the rocky crust, the strata on the west side of which are hundreds of feet above the corresponding strata on the east.

"The mineral waters probably underlie the southern half of the entire county, many hundred feet below the surface; the accident of the fault determining their appearance as springs in the valley of Saratoga Springs, where, by virtue of the greater elevation of their distant source, they reach the surface through crevices in the rocks produced by the fracture.

"It is probable that water can be obtained anywhere in the southern portion of the county by tapping the underlying Potsdam sandstone....