Samuel Rutherford and some of his correspondents 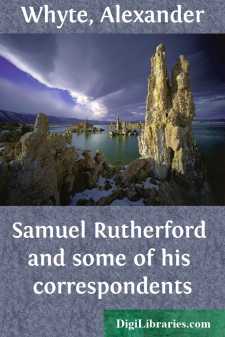 ‘He sent me as a spy to see the land and to try the ford.’Rutherford.

Samuel Rutherford, the author of the seraphic Letters, was born in the south of Scotland in the year of our Lord 1600.  Thomas Goodwin was born in England in the same year, Robert Leighton in 1611, Richard Baxter in 1615, John Owen in 1616, John Bunyan in 1628, and John Howe in 1630.  A little vellum-covered volume now lies open before me, the title-page of which runs thus:—‘Joshua Redivivus, or Mr. Rutherford’s Letters, now published for the use of the people of God: but more particularly for those who now are, or may afterwards be, put to suffering for Christ and His cause.  By a well-wisher to the work and to the people of God.  Printed in the year 1664.’  That is all.  It would not have been safe in 1664 to say more.  There is no editor’s name on the title-page, no publisher’s name, and no place of printing or of publication.  Only two texts of forewarning and reassuring Scripture, and then the year of grace 1664.

Joshua Redivivus: That is to say, Moses’ spy and pioneer, Moses’ successor and the captain of the Lord’s covenanted host come back again.  A second Joshua sent to Scotland to go before God’s people in that land and in that day; a spy who would both by his experience and by his testimony cheer and encourage the suffering people of God.  For all this Samuel Rutherford truly was.  As he said of himself in one of his letters to Hugh Mackail, he was indeed a spy sent out to make experiment upon the life of silence and separation, banishment and martyrdom, and to bring back a report of that life for the vindication of Christ and for the support and encouragement of His people.  It was a happy thought of Rutherford’s first editor, Robert M’Ward, his old Westminster Assembly secretary, to put at the top of his title-page, Joshua risen again from the dead, or, Mr. Rutherford’s Letters written from his place of banishment in Aberdeen.

In selecting his twelve spies, Moses went on the principle of choosing the best and the ablest men he could lay hold of in all Israel.  And in selecting Samuel Rutherford to be the first sufferer for His covenanted people in Scotland, our Lord took a man who was already famous for his character and his services.  For no man of his age in broad Scotland stood higher as a scholar, a theologian, a controversialist, a preacher and a very saint than Samuel Rutherford.  He had been settled at Anwoth on the Solway in 1627, and for the next nine years he had lived such a noble life among his people as to make Anwoth famous as long as Jesus Christ has a Church in Scotland.  As we say Bunyan and Bedford, Baxter and Kidderminster, Newton and Olney, Edwards and Northampton, Boston and Ettrick, M’Cheyne and St. Peter’s, so we say Rutherford and Anwoth.

His talents, his industry, his scholarship, his preaching power, his pastoral solicitude and his saintly character all combined to make Rutherford a marked man both to the friends and to the enemies of the truth.  His talents and his industry while he was yet a student in Edinburgh had carried him to the top of his classes, and all his days he could write in Latin better than either in Scotch or English.  His habits of work at Anwoth soon became a very proverb.  His people boasted that their minister was always at his books, always among his parishioners, always at their sick-beds and their death-beds, always catechising their children and always alone with his God.  And then the matchless preaching of the parish church of Anwoth.  We can gather what made the Sabbaths of Anwoth so memorable both to Rutherford and to his people from the books we still have from those great Sabbaths: The Trial and the Triumph of Faith; Christ Dying and Drawing Sinners to Himself; and such like.  Rutherford was the ‘most moving and the most affectionate of preachers,’ a preacher determined to know nothing but Jesus Christ and Him crucified, but not so much crucified, as crucified and risen again—crucified indeed, but now glorified.  Rutherford’s life for his people at Anwoth has something altogether superhuman and unearthly about it.  His correspondents in his own day and his critics in our day stumble at his too intense devotion to his charge; he lived for his congregation, they tell us, almost to the neglect of his wife and children.  But by the time of his banishment his home was desolate, his wife and children were in the grave.  And all the time and thought and love they had got from him while they were alive had, now that they were dead, returned with new and intensified devotion to his people and his parish....