Sam's Chance And How He Improved It 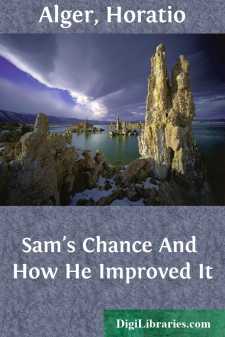 "If I'm goin' into a office I'll have to buy some new clo'es," thoughtSam Barker.

He was a boy of fifteen, who, for three years, had been drifting about the streets of New York, getting his living as he could; now blacking boots, now selling papers, now carrying bundles—"everything by turns, and nothing long." He was not a model boy, as those who have read his early history, in "The Young Outlaw," are aware; but, on the other hand, he was not extremely bad. He liked fun, even if it involved mischief; and he could not be called strictly truthful nor honest. But he would not wantonly injure or tyrannize over a smaller boy, and there was nothing mean or malicious about him. Still he was hardly the sort of boy a merchant would be likely to select as an office boy, and but for a lucky chance Sam would have been compelled to remain a bootblack or newsboy. One day he found, in an uptown street, a little boy, who had strayed away from his nurse, and, ascertaining where he lived, restored him to his anxious parents. For this good deed he was rewarded by a gift of five dollars and the offer of a position as errand boy, at five dollars a week.

Sam decided that he must have some new clothes before he could enter upon his place. At present his costume consisted of a ragged shirt, and a pair of equally ragged pantaloons. Both were of unknown antiquity, and had done faithful service, not only to Sam, but to a former owner. It was quite time they were released from duty.

To buy a complete outfit with five dollars might have puzzled many an able financier. But Sam knew just where to go. Somewhere in the neighborhood of Baxter Street there was a second-hand clothing establishment, which he had patronized on previous occasions, and where he knew that the prices were low. It was to this place that he bent his steps.

A wrinkled old man—the proprietor—stood outside, scanning, with cunning eyes, the passers-by. If any one paused to examine his stock, he was immediately assailed by voluble recommendations of this or that article, and urgently entreated to "just step inside."

When Sam approached, the old man's shrewdness was at fault. He did not suspect that the ragged street boy was likely to become a customer, and merely suffered his glance to rest upon him casually.

But Sam accosted him with a business-like manner.

"Look here, old man, have you got any tiptop clo'es to sell to-day?"

"Yes, my son," answered the old man, with an air of alacrity.

"Who are you a-takin' to? I ain't your son, and I wouldn't be. My father's a member of Congress."

"Did he send you here to buy clo'es?" asked the old man, with a grin.

"So I will, my—boy. This is the cheapest place in the city."

"Well, old man, trot out your best suits. I want 'em in the style, you know."

"I know that from your looks," said the old man, a grin illumining his wrinkled face, as he glanced at the rags Sam wore.