Salem Witchcraft, Volumes I and II With an Account of Salem Village and a History of Opinions on Witchcraft and Kindred Subjects 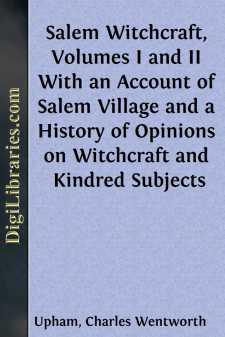 The , based upon various local maps and the Coast-Survey chart, is the result of much personal exploration and perambulation of the ground. It may claim to be a very exact representation of many of the original grants and farms. The locality of the houses, mills, and bridges, in 1692, is given in some cases precisely, and in all with near approximation. The task has been a difficult one. An original plot of Governor Endicott's Ipswich River grant, No. III., is in the State House, and one of the Swinnerton grant, No. XIX., in the Salem town-books. Neither of them, however, affords elements by which to establish its exact location. A plot of the Townsend Bishop grant, No. XX., as its boundaries were finally determined, is in the State House, and another of the same in the court-files of the county. This gives one fixed and known point, Hadlock's Bridge, from which, following the lines by points of compass and distances, as indicated on the plot and described in the Colonial Records, all the sides of the grant are laid out with accuracy, and its place on the determined with absolute certainty. A very perfect and scientifically executed plan of a part of the boundary between Salem and Reading in 1666 is in the State House; of which an exact tracing was kindly furnished by Mr. H.J. Coolidge, of the Secretary of State's office. It gives two of the sides of the Governor Bellingham grant, No. IV., in such a manner as to afford the means of projecting it with entire certainty, and fixing its locality. There are no other plots of original or early grants or farms on this territory; but, starting from the Bishop and Bellingham grants thus laid out in their respective places, by a collation of deeds of conveyance and partition on record, with the aid of portions of the primitive stone-walls still remaining, and measurements resting on permanent objects, the entire region has been reduced to a demarkation comprehending the whole area. The locations of then-existing roads have been obtained from the returns of laying-out committees, and other evidence in the records and files. The construction of the , in all its details, is the result of the researches and labors of W.P. Upham.

The is a photograph by E.R. Perkins, of Salem. The original, among the papers on file in the office of the clerk of the courts of Essex County, having always been regarded as a great curiosity, has been subjected to constant handling, and become much obscured by dilapidation. The letters, and in some instances entire words, at the end of the lines, are worn off. To preserve it, if possible, from further injury, it has been pasted on cloth. Owing to this circumstance, and the yellowish hue to which the paper has faded, it does not take favorably by photograph; but the exactness of imitation, which can only thus be obtained with absolute certainty, is more important than any other consideration. Only so much as contains the body of the warrant, the sheriff's , and the seal, are given....