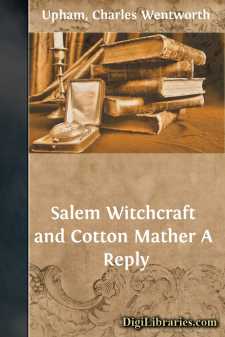 An article in The North American Review, for April, 1869, is mostly devoted to a notice of the work published by me, in 1867, entitled Salem Witchcraft, with an account of Salem Village, and a history of opinions on witchcraft and kindred subjects. If the article had contained criticisms, in the usual style, merely affecting the character of that work, in a literary point of view, no other duty would have devolved upon me, than carefully to consider and respectfully heed its suggestions. But it raises questions of an historical nature that seem to demand a response, either acknowledging the correctness of its statements or vindicating my own.

The character of the Periodical in which it appears; the manner in which it was heralded by rumor, long before its publication; its circulation, since, in a separate pamphlet form; and the extent to which, in certain quarters, its assumptions have been endorsed, make a reply imperative.

The subject to which it relates is of acknowledged interest and importance. The Witchcraft Delusion of 1692 has justly arrested a wider notice, and probably always will, than any other occurrence in the early colonial history of this country. It presents phenomena in the realm of our spiritual nature, belonging to that higher department of physiology, known as Psychology, of the greatest moment; and illustrates the operations of the imagination upon the passions and faculties in immediate connection with it, and the perils to which the soul and society are thereby exposed, in a manner more striking, startling and instructive than is elsewhere to be found. For all reasons, truth and justice require of those who venture to explore and portray it, the utmost efforts to elucidate its passages and delineate correctly its actors.

With these views I hail with satisfaction the criticisms that may be offered upon my book, without regard to their personal character or bearing, as continuing and heightening the interest felt in the subject; and avail myself of the opportunity, tendered to me without solicitation and in a most liberal spirit, by the proprietor of this Magazine, to meet the obligations which historical truth and justice impose.

The principle charge, and it is repeated in innumerable forms through the sixty odd pages of the article in the North American, is that I have misrepresented the part borne by Cotton Mather in the proceeding connected with the Witchcraft Delusion and prosecutions, in 1692. Various other complaints are made of inaccuracy and unfairness, particularly in reference to the position of Increase Mather and the course of the Boston Ministers of that period, generally. Although the discussion, to which I now ask attention, may appear, at first view, to relate to questions merely personal, it will be found, I think, to lead to an exploration of the literature and prevalent sentiments, relating to religious and philosophical subjects, of that period; and, also, of an instructive passage in the public history of the Province of Massachusetts Bay....