Sakoontala or the Lost Ring An Indian Drama 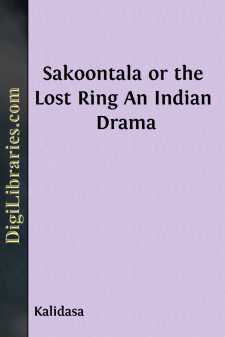 Add to My Favorites
Published: 8 years ago
Downloads: 48
Rating: (0 Votes)

About a century has elapsed since the great English Orientalist, Sir William Jones, astonished the learned world by the discovery of a Sanskrit Dramatic Literature. He has himself given us the history of this discovery. It appears that, on his arrival in Bengal, he was very solicitous to procure access to certain books called Nátaks, of which he had read in one of the 'Lettres Édifiantes et Curieuses' written by the Jesuit Missionaries of China. But, although he sought information by consulting both Bráhmans and Europeans, he was wholly unable for some time to satisfy his curiosity as to the nature of these books. It was reported to him that they were not histories, as he had hoped, but that they abounded with fables, and consisted of conversations in prose and verse held before ancient Rájás, in their public assemblies. Others, again, asserted that they were discourses on dancing, music, and poetry. At length, a sensible Bráhman, conversant with European manners, removed all his doubts, and gave him no less delight than surprise, by telling him that the English nation had compositions of the same sort, which were publicly represented at Calcutta in the cold season, and bore the name of 'plays.' The same Bráhman, when asked which of these Nátaks was most universally esteemed, answered without hesitation, '[S']akoontalá.'

It may readily be imagined with what interest, the keen Orientalist received this communication; with what rapidity he followed up the clue; and, when at length his zeal was rewarded by actual possession of a MS. copy of one of these dramas, with what avidity he proceeded to explore the treasures which for eighteen hundred years had remained as unknown to the European world as the gold-fields of Australia.

The earliest Sanskrit drama with which we are acquainted, the 'Clay-cart,' translated by my predecessor in the Boden Chair at Oxford, Professor H.H. Wilson, is attributed to a regal author, King [S']údraka, the date of whose reign cannot be fixed with any certainty, though some have assigned it to the first or second century B.C. Considering that the nations of Europe can scarcely be said to have possessed a dramatic literature before the fourteenth or fifteenth century of the present era, the great age of the Hindú plays would of itself be a most interesting and attractive circumstance, even if their poetical merit were not of a very high order. But when to the antiquity of these productions is added their extreme beauty and excellence as literary compositions, and when we also take into account their value as representations of the early condition of Hindú society—which, notwithstanding the lapse of two thousand years, has in many particulars obeyed the law of unchangeableness ever stamped on the manners and customs of the East—we are led to wonder that the study of the Indian drama has not commended itself in a greater degree to the attention of Europeans, and especially of Englishmen. The English student, at least, is bound by considerations of duty, as well as curiosity, to make himself acquainted with a subject which elucidates and explains the condition of the millions of Hindús who owe allegiance to his own Sovereign, and are governed by English laws....