Saint Athanasius The Father of Orthodoxy

by F. A. (Frances Alice) Forbes 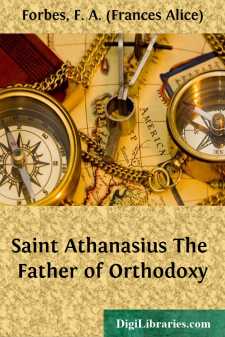 THE Patriarch of Alexandria, Egypt was expecting company. He stood at the window of his palace looking down the long road, that at the first sign of his guests' arrival he might go forth and welcome them. Before him, like a white pearl in the blue waters of the Mediterranean, lay the city of Alexandria—"the beautiful," as men loved to call it. Across the harbor the marble tower of the great lighthouse soared up into the clear Eastern sky, white as the white cliffs of the Island of Pharos from which it sprang. It was noonday, and the sunshine lay like a veil of gold over all.

The Patriarch's thoughts were wandering in the past. He had been celebrating the anniversary of his holy predecessor Peter, the previous Bishop, who had won the crown of martyrdom during the terrible persecution of the Christians not so many years before. Several of the clergy present had come from afar to assist at the festival, and these were to be his expected guests.

The time of suffering was past and over, and yet it seemed to Alexander as if it had all happened yesterday and might happen again tomorrow. There stood the great palace of the Caesars, where the pagan emperor had sat in judgment upon the lambs of Christ's flock; there the famous temple of Serapis, where the Christians had been dragged to offer incense to the gods; there the amphitheater where they had been torn to pieces by beasts and slain with the sword for confessing the Name of Christ. And all through those dark days, firm and steadfast as the lighthouse on the cliffs of Pharos, had stood the Patriarch Peter, a tower of strength and comfort to his persecuted children.

A hundred Bishops and more had looked to him as their head, for the See of Alexandria in the East was second only to that of Rome in the West, and the burden of responsibility was heavy. But, thanks to the example of its chief, the Church in Egypt had borne the trial bravely, and if some had quailed before the torture and the rack and had fallen away, by far the greater number had been true. Even the unheroic souls, who had loved their lives better than their God, had not been lost beyond hope, for they had come back during the lulls in the storm, begging to be absolved from their sin. And Peter, mindful of his Master's words that he should not quench the smoking flax nor break the bruised reed, received them back, after they had done penance, into the fold of Christ with mercy and compassion.

There were some who had not scrupled to protest against such mercy. "Were these apostates," cried Meletius, Bishop of Lykopolis, "to be made equal to those who had borne the burden and the heat of the day?" And he had rebelled against the decision of the Patriarch and made a schism in the Church. Even the martyrdom of the holy Peter had not brought him back to his allegiance: the Meletians were rebels still, to the crying scandal of Christians and pagans alike.

They were a hard people to govern, these Alexandrians—subtle, passionate and unstable, ready to follow any preacher of novelties....