Ruth Fielding on the St. Lawrence The Queer Old Man of the Thousand Islands 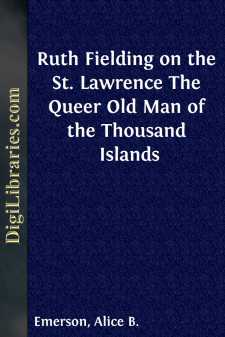 The sudden joyous pealing of the organ could be heard upon the sidewalk before the stately church. As there was a broad canopy from the door to the curb, with a carpet laid down and motor-cars standing in line, it took no seer to proclaim that a wedding was in progress within.

Idlers halted to wait for the appearance of the wedding party, which was about to come forth. Some of the younger spectators ran up the steps and peered in at the door, for there was only a lame, old, purblind sexton on guard, and he, too, seemed vastly interested in what was going on inside.

One glance down the main aisle of the great edifice revealed a much more elaborate scheme of decoration than usually appears at a church wedding. Its main effect was the intertwining of French and American flags, and as the bridal party turned from the altar the horizon blue uniform of the soldier-bridegroom was a patch of vivid color that could not be mistaken.

The bride in her white gown and veil and wreath made, it may be, even a more prominent picture than did her husband. But that was only to be expected perhaps, for a girl on her wedding day, and in the church, is usually the focus of all eyes.

It must be confessed (even her dearest friends must confess it) there was another reason why she who, only a moment before had been Jennie Stone, quite filled the public eye.

In the first place, Jennie was a well-built girl, and upon her well-built frame there had always been since her childhood days a superabundance of flesh. And getting married had not changed sweet, jolly, funny Jennie Stone in the least! Instead of coming back down the aisle of the church with modestly downcast eyes (which is usually a hypocritical display of emotion), Jennie smiled at her friends and beamed proudly upon the figure in horizon blue at her side.

And she might well be proud of Major Henri Marchand, for he was in the very best sense a soldier and a gentleman, and there gleamed a bit of color on his breast that had been pinned there by Marshal Foch’s own hand. As he was still in active service and had only been given leave to come to America for his bride, this might be considered the last military wedding that the old church was likely to see—perhaps for many years.

The groom’s French uniform, and even the olive gray of the best man and two or three other men in the party at the altar, had lent their touch of color to the picture. But it was the bride’s attendants, however, that made the party so well worth looking at—especially to the greater number of young women and girls in the pews.

Jennie Stone was a popular girl, and had friends galore. Many of those girl friends had come from a distance to see their beloved “Heavy Stone” (as she had been nicknamed in the old Briarwood Hall days) married to the man she had met in France while she was engaged in those useful and helpful occupations into which so many American girls entered during the war.

Besides, Jennie was the first of the old Briarwood Hall set to be married, and this was bound to be a gala occasion....