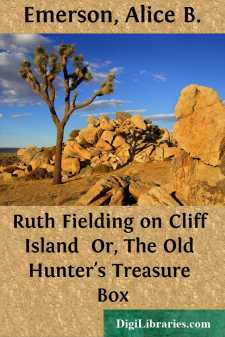 THE WRECK AT APPLEGATE CROSSING

A September morning has dawned, with only a vague tang of autumn in the air. In the green old dooryard at the Red Mill, under the spreading shade trees, two girls are shelling a great basket of dried lima beans for the winter's store.

"You mean on this morning train?" responded the plumper and more mature-looking girl, whose frank face was particularly attractive.

"Then Tom said he would go back to meet the evening train—and we'll go with him," said Ruth Fielding, with a smile. "But I could not go this morning and leave poor Aunt Alvirah all these beans to shell."

"Of course not," agreed her friend, promptly. "And Jane Ann won't feel offended by our not meeting her at Cheslow, I know."

"Sensible about everything but her name," commented Helen Cameron, making a little face.

"And one can scarcely blame her. It is ugly," Ruth responded, with a sigh. "Jane Ann Hicks! Dear, dear! how could her Uncle Bill be so thoughtless as to name her that, when she was left, helpless, to his care?"

"He didn't realize that fashions in names change—like everything else," observed Helen, briskly.

"I wonder what the girls at Briarwood will say to that name," Ruth pondered.

"Why The Fox and Heavy will help us make the other girls toe the mark. And Madge Steele! She's a regiment in herself," declared Helen. "We all had such a fine time at Silver Ranch that the least we can do is to see that Jane Ann is not hazed like the other infants."

"I expect we all have to stand our share of hazing when we go into fresh company," said Ruth, reflectively. "But there will not be the same crowd to meet her that met us, dear."

"And the Sweetbriars will be on hand to preserve order," laughed her chum. "Thanks to you, Ruthie. Why—oh! see Tom!"

She jumped up, dropping a lapful of pods, and pointed up the Cheslow road, which here branched from the river road almost opposite the Red Mill.

"What is the matter?" demanded Ruth, also scrambling to her feet.

A big touring car was approaching at top speed. They could see that the only person in it was a black-haired boy, who sat at the steering wheel.

He brought the machine to an abrupt stop before the gate, and leaped out. Tearing off his goggles as he ran, he approached the two girls in such a state of excitement that he could scarce speak coherently.

"Oh, Tom! what is it?" gasped Helen, seizing his arm with both hands.

It took but a single glance to discover the relationship between them. Twins never looked more alike—only Tom's features lacked the delicacy of outline which belonged to his sister.

"Tom!" cried Ruth, on the other side of the excited youth, "don't keep us on tenter-hooks. Surely nothing has happened to Jane Ann?"

"I don't know! They won't tell us much about it at the station," exclaimed the boy.