Ruth Fielding of the Red Mill Or, Jasper Parloe's Secret 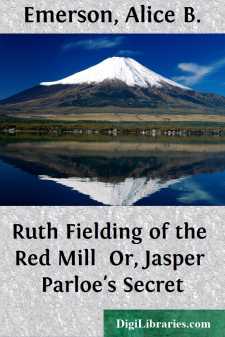 Ruth felt that she was not very successful at Miss Cramp's school. Not that she had fallen behind in her studies, or failed to please her kind instructor; but among the pupils of the upper grade she was all but unconsidered. Perhaps, had time been given her, Ruth might have won her way with some of the fairer-minded girls; but in the few short weeks she had been in the district she had only managed to make enemies among the members of her own class.

There was probably no girl in the graduating class, from Julia Semple and Rosa Ball, down the line, who was not glad that the girl from the Red Mill— a charity child!— was not numbered in the regular class and had no part in the graduating exercises. Nevertheless, Ruth proposed, if it were possible, to enter the Cheslow High School in the fall, and to that end she was determined to work at her books— with Miss Cramp's help— all summer.

When it came to the last day, however, and it was known that Ruth would not come back to that school again in the autumn, the smaller girls gathered about her and were really sorry that she was to go. Forced out of any part with her own grade of pupils, Ruth had taken the little ones about her and played and taught them games, had told them stories on rainy days, and otherwise endeared herself to them. And now the little folk made much of her on this last day, bringing her flowers, and little presents, and clinging about her before the afternoon session began and their parents and friends came to listen to the exercises, in a way that was very pretty to behold.

Aunt Alvirah wanted to come to the closing exercises of the school; but to expect Uncle Jabez to leave the mill in business hours for any such thing as that was altogether ridiculous to contemplate. Uncle Jabez had, however, paid some small attention to Ruth in her new dress. Before she started for school that last day she went to the mill door and showed herself to the miller.

"Well, I don't see but you look as fine as the rest of 'em," he said, slowly. "And the price ain't much. You used judgment in buying, Niece Ruth. I'll say that much for ye."

This being the first word of approval the miller had ever given her, the girl appreciated it to its full value. Since he had given her the dress she had wished more than ever to become friendly with him. But he was so moody and so given up to his accounts and the hoarding of wealth, that it seemed next to impossible for the girl to get near Uncle Jabez. Besides, he had never recovered from the bitterness engendered by the loss of the cash-box. A heavy scowl rested upon his brow all the time. Sometimes he sighed and shook his head when he sat idle at the table, or on the porch in the evening; and Ruth believed he must be mourning the money which the flood was supposed to have swept away.

But although neither of the old folks at the Red Mill came to see the graduating exercises, Ruth was not exactly unhappy. The little children showing her that they liked her so well, could not fail to be a lasting pleasure to Ruth....