Ruth Fielding in the Great Northwest Or, The Indian Girl Star of the Movies 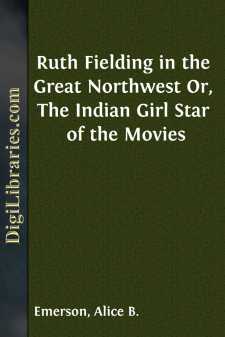 The gray dust, spurting from beneath the treads of the rapidly turning wheels, drifted across the country road to settle on the wayside hedges. The purring of the engine of Helen Cameron's car betrayed the fact that it was tuned to perfection. If there were any rough spots in the road being traveled, the shock absorbers took care of them.

"Dear me! I always do love to ride in Nell's car," said the plump and pretty girl who occupied more than her share of the rear seat. "Even if Tom isn't here to take care of it, it always is so comfy."

"Only one thing would suit you better, Heavy," declared the sharp-featured and sharp-tongued girl sitting next to Jennie Stone. "If only a motor could be connected to a rocking-chair—"

"Right-o!" agreed the cheerful plump girl. "And have it on a nice shady porch. I'd like to travel that way just as well. After our experience in France we ought to be allowed to travel in comfort for the rest of our lives. Isn't that so, Nell? And you agree, Ruthie?"

The girl at the wheel of the flying automobile nodded only, for she needed to keep her gaze fixed ahead. But the brown-haired, brown-eyed girl, whose quiet face seemed rather wistful, turned to smile upon the volatile—and voluble—Heavy Stone, so nicknamed during their early school days at Briarwood Hall.

"Don't let's talk about it, honey," she said. "I try not to think of what we all went through."

"And the soup I tasted!" groaned the plump one. "That diet kitchen in Paris! I'll never get over it—never!"

"I guess that's right," agreed Mercy Curtis, the sharp-featured girl. "How that really nice Frenchman can stand for such a fat girl—"

"Why," explained Heavy calmly, "the more there is of me the more there is for him to like." Then she giggled. "There were so few fat people left in Europe after four years of war that everybody liked to look at me."

"You certainly are a sight for sore eyes," Helen Cameron shot over her shoulder, but without losing sight of the road ahead. She was a careful, if rapid, driver. "And for any other eyes! One couldn't very well miss you, Heavy."

"Let's not talk any more about France—or the war—or anything like that," proposed Ruth Fielding, the shadow on her face deepening. "Both your Henri and Helen's Tom have had to go back—"

"Helen's Tom?" repeated Mercy Curtis softly. But Jennie Stone pinched her. She would not allow anybody to tease Ruth, although they all knew well enough that the absence of Helen's twin brother meant as much to Ruth Fielding as it did to his sister.

This was strictly a girl's party, this ride in Helen Cameron's automobile. Aside from Mercy, who was the daughter of the Cheslow railroad station agent, and therefore lived in Cheslow all the year around, the girls were not native to the place. They had just left that pretty town behind them. It appeared that Ruth, Helen, and surely Jennie Stone, knew very few of the young men of Cheslow. So this jaunt was, as Jennie saucily said, entirely "poulette".

"Which she thinks is French for 'old hen,'" scoffed the tart Mercy....