Ruth Fielding in Moving Pictures Or, Helping the Dormitory Fund 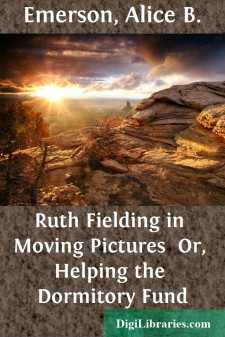 NOT IN THE SCENARIO

"What in the world are those people up to?"

Ruth Fielding's clear voice asked the question of her chum, Helen Cameron, and her chum's twin-brother, Tom. She turned from the barberry bush she had just cleared of fruit and, standing on the high bank by the roadside, gazed across the rolling fields to the Lumano River.

"What people?" asked Helen, turning deliberately in the automobile seat to look in the direction indicated by Ruth.

"Where? People?" joined in Tom, who was tinkering with the mechanism of the automobile and had a smudge of grease across his face.

"Right over the fields yonder," Ruth explained, carefully balancing the pail of berries. "Can't you see them, Helen?"

"No-o," confessed her chum, who was not looking at all where Ruth pointed.

"Where are your eyes?" Ruth cried sharply.

"Nell is too lazy to stand up and look," laughed Tom. "I see them. Why! there's quite a bunch—and they're running."

"Where? Where?" Helen now demanded, rising to look.

"Oh, goosy!" laughed Ruth, in some vexation. "Right ahead. Surely you can see them now?"

"Oh," drawled Tom, "sis wouldn't see a meteor if it fell into her lap."

"I guess that's right, Tommy," responded his twin, in some scorn. "Neither would you. Your knowledge of the heavenly bodies is very small indeed, I fear. What do they teach you at Seven Oaks?"

"Not much about anything celestial, I guarantee," said Ruth, slyly. "Oh! there those folks go again."

"Goodness me!" gasped Helen. "Where are these wonderful persons? Oh! I see them now."

"Whom do you suppose they are chasing?" demanded Tom Cameron. "Or, who is chasing them?"

"That's it, Tommy," scoffed his sister. "I understand you have taken up navigation with the other branches of higher mathematics at Seven Oaks; and now you want to trouble Ruth and me with conundrums.

"Are we soothsayers, that we should be able to explain, off-hand," pursued Helen, "the actions of such a crazy crowd of people as those——Do look there! that woman jumped right down that sandbank. Did you ever?"

"And there goes another!" Ruth exclaimed.

"Likewise a third," came from Tom, who was quite as much puzzled as were the girls.

"One after the other—just like Brown's cows," giggled Helen. "Isn't that funny?"

"It's like one of those chases in the moving pictures," suggested Tom.

"Why, of course!" Ruth cried, relieved at once. "That's exactly what it is," and she scrambled down the bank with the pail of barberries.

"What is what?" asked her chum.

"Moving pictures," Ruth said confidently. "That is, it will be a film in time. They are making a picture over yonder. I can see the camera-man off at one side, turning the crank."

"Cracky!" exclaimed Tom, grinning, "I thought that was a fellow with a hand-organ, and I was looking for the monkey."

"Monkey, yourself," cried his sister, gaily.

"Didn't know but that he was playing for those 'crazy creeters'—as your Aunt Alvirah would call them, Ruthie—to dance by," went on Tom. "Come on! I've got this thing fixed up so it will hobble along a little farther....