Ruth Fielding Down East Or, The Hermit of Beach Plum Point 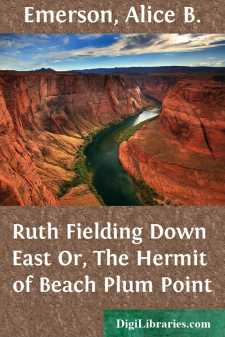 Across the now placidly flowing Lumano where it widened into almost the proportions of a lake just below the picturesque Red Mill, a bank of tempestuous clouds was shouldering into view above the sky line of the rugged and wooded hills. These slate-colored clouds, edged with pallid light, foredoomed the continuance of the peaceful summer afternoon.

Not a breath of air stirred on the near side of the river. The huge old elms shading the Red Mill and the farmhouse connected with it belonging to Mr. Jabez Potter, the miller, were like painted trees, so still were they. The brooding heat of midday, however, had presaged the coming storm, and it had been prepared for at mill and farmhouse. The tempest was due soon.

The backyard of the farmhouse—a beautiful lawn of short grass—sloped down to the river. On the bank and over the stream itself was set a summer-house of fair proportions, covered with vines—a cool and shady retreat on the very hottest day of midsummer.

A big robin redbreast had been calling his raucous weather warning from the top of one of the trees near the house; but, with her back to the river and the coming storm, the girl in the pavilion gave little heed to this good-intentioned weather prophet.

She did raise her eyes, however, at the querulous whistle of a striped creeper that was wriggling through the intertwined branches of the trumpet-vine in search of insects. Ruth Fielding was always interested in those busy, helpful little songsters.

“You cute little thing!” she murmured, at last catching sight of the flashing bird between the stems of the old vine. “I wish I could put you into my scenario.”

On the table at which she was sitting was a packet of typewritten sheets which she had been annotating, and two fat note books. She laid down her gold-mounted fountain pen as she uttered these words, and then sighed and pushed her chair back from the table.

Then she stood up suddenly. A sound had startled her. She looked all about the summer-house—a sharp, suspicious glance. Then she tiptoed to the door and peered out.

The creeper fluttered away. The robin continued to shout his warning. Had it really been a rustling in the vines she had heard? Was there somebody lurking about the summer-house?

She stepped out and looked on both sides. It was then she saw how threatening the aspect of the clouds on the other side of the river were. The sight drove from her thoughts for the moment the strange sound she had heard. She did not take pains to look beneath the summer-house on the water side.

Instead, another sound assailed her ears. This time one that she could not mistake for anything but just what it was—the musical horn of Tom Cameron’s automobile. Ruth turned swiftly to look up the road. A dark maroon car, long and low-hung like a racer, was coming along the road, leaving a funnel of dust behind it. There were two people in the car.

The girl beside the driver—black-haired and petite—fluttered her handkerchief in greeting when she saw Ruth standing by the summer-house....