Ruth Fielding at Snow Camp Or, Lost in the Backwoods 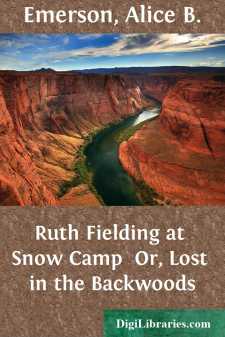 CHAPTER I A LIVELY TIME

"Why not? Mr. Bassett won't care—and it's the nearest way to the road."

"But he's got a sign up—and his cattle run in this pasture," said Ruth Fielding, who, with her chum, Helen Cameron, and Helen's twin brother, Tom, had been skating on the Lumano River, where the ice was smooth below the mouth of the creek which emptied into the larger stream near the Red Mill.

The ground was hard and the ice was thick on the river; but the early snows that had fallen were gone. It was the day after Christmas, and Helen and Ruth had been at home from school at Briarwood Hall less than a week. Tom, too, who attended the Military Academy at Seven Oaks, was home for the winter holidays. It was snapping cold weather, but the sun had been bright this day and for three hours or more the friends had enjoyed themselves on the ice.

"Surely Hiram Bassett hasn't turned his cows out in this weather," laughed Helen.

"But maybe he has turned out his bull," said Ruth. "You know how ugly that creature is. And there's the sign."

"I declare! you do beat Peter!" ejaculated Tom, shrugging his shoulders. "We are only going to cut across Bassett's field—it won't take ten minutes. And it will save us half an hour in getting to the mill. We can't go along shore, for the ice is open there at the creek."

"All right," agreed Ruth Fielding, doubtfully. She was younger than the twins and did not mean to be a wet blanket on their fun at any time; but admiring Helen so much, she often gave up her own inclinations, or was won by the elder girl from a course which she thought wise. There had been times during their first term at Briarwood Hall, now just completed, when Ruth had been obliged to take a different course from her chum. This occasion, however, seemed of little moment. Hiram Bassett owned a huge red herd-leader that was the terror of the countryside; but it was a fact, as Helen said, that the cattle were not likely to be roaming the pasture at this time of year.

"Come on!" said Tom, again. "The car was to go down to the Cheslow station for father and stop at the mill for us on its return. We don't want to keep him waiting."

"And we've got so much to do to-night, Ruthie!" cried Helen. "Have you got your things packed?"

"Aunt Alvirah said she would look my clothes over," said Ruth, in reply. "I don't really see as I've much to take, Helen. We only want warm things up there in the woods."

"And plenty of 'em," advised Tom. "Bring your skates. We may get a chance to use them if the snow isn't too heavy. But up there in the backwoods the snow hasn't melted, you can bet, since the first fall in November."

"We'll have just the loveliest time!" went on Helen, with her usual enthusiasm. "Tom and I spent a week-end at Snow Camp when Mr. Parrish owned it, and when we knew he was going to sell, we just begged papa to buy it. You never saw such a lovely old log cabin—"

"I never saw a log cabin at all," responded Ruth, laughing....