Ruth Fielding At College or The Missing Examination Papers 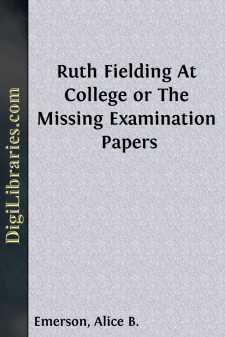 By no possibility could Aunt Alvirah Boggs have risen from her low rocking chair in the Red Mill kitchen without murmuring this complaint.

She was a little, hoop-backed woman, with crippled limbs; but she possessed a countenance that was very much alive, nut-brown and innumerably wrinkled though it was.

She had been Mr. Jabez Potter's housekeeper at the Red Mill for more than fifteen years, and if anybody knew the "moods and tenses" of the miserly miller, it must have been Aunt Alvirah. She even professed to know the miller's feelings toward his grand-niece, Ruth Fielding, better than Ruth knew them herself.

The little old woman was expecting the return of Ruth now, and she went to the porch to see if she could spy her down the road, and thus be warned in time to set the tea to draw. Ruth and her friends, who had gone for a tramp in the September woods, would come in ravenous for tea and cakes and bread-and-butter sandwiches.

Aunt Alvirah looked out upon a very beautiful autumn landscape when she opened the farmhouse door. The valley of the Lumano was attractive at all times—in storm or sunshine. Now it was a riot of color, from the deep crimson of the sumac to the pale amber of certain maple leaves which fell in showers whenever the wanton breeze shook the boughs.

She identified the trio striding up the roadway, distant as they were. Ruth, her cheeks rosy, her hair flying, came on ahead, while the black-haired and black-eyed twins, Helen and Tom Cameron, walked hand-in-hand behind her. This was their final outing together in the vicinity of the Red Mill for many months. Helen and Tom were always very close companions, and although they had already been separated during school terms, Tom had run over from Seven Oaks to see his sister at Briarwood for almost every week-end.

"No more of 'sich doin's now, old man," Helen said to him, smiling rather tremulously. "And even when you get to Harvard next year, you will not be allowed often at Ardmore. They say there is a sign 'No Boys Allowed' stuck up beside every 'Keep Off the Grass' sign on the Ardmore lawns."

"Oh, I only repeat what I've been told."

"Well, Sis, you won't be entirely alone," Tom said kindly. "Ruth will be with you. You and she will have your usual good times."

"Of course. But you'll be awfully lonely, Tommy."

Then Ruth's gay voice hailed them from the porch upon which she had mounted yards ahead of them.

"Come on, slow-pokes. Aunt Alvirah has put on the tea. I smell it!"

Ruth Fielding did not possess her chum's measure of beauty. Helen was a dainty, compelling brunette with flashing eyes—eyes she had already learned to use to the undoing of what Ruth called "the youthful male of the species."

As for Ruth herself, she considered boys no mystery. She was fond of Tom, for he was the first friend she had made in that long-ago time when she arrived, a little girl and a stranger, at the Red Mill....