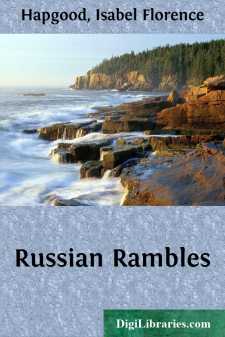 PASSPORTS, POLICE, AND POST-OFFICE IN RUSSIA.

We imported into Russia, untaxed, undiscovered by the custom-house officials, a goodly stock of misadvice, misinformation, apprehensions, and prejudices, like most foreigners, albeit we were unusually well informed, and confident that we were correctly posted on the grand outlines of Russian life, at least. We were forced to begin very promptly the involuntary process of getting rid of them. Our anxiety began in Berlin. We visited the Russian consul-general there to get our passports vised. He said, "You should have got the signature of the American consul. Do that, and return here."

At that moment, the door leading from his office to his drawing-room opened, and his wife made her appearance on the threshold, with the emphatic query, "When are you coming?"

"Immediately, my dear," he replied. "Just wait a moment, until I get rid of these Americans."

Then he decided to rid himself of us for good. "I will assume the responsibility for you," he said, affixed his signature on the spot, to spare himself a second visit, and, collecting his fees, bowed us out. I suppose he argued that we should have known the ropes and attended to all details accurately, in order to ward off suspicion, had we been suspicious characters. How could he know that the Americans understood Russian, and that this plain act of "getting rid" of us would weigh on our minds all the way to the Russian frontier?

At Wirballen the police evoked a throb of gratitude from our relieved hearts. No one seemed to suspect that the American government owned a consul in Berlin who could write his name on our huge parchments, which contrasted so strongly with the compact little documents from other lands.

"Which are your passports?" asked the tall gendarme who guarded the door of the restaurant, as we passed out to take our seats in the Russian train.

"The biggest," I replied, without mentioning names, and he handed them over with a grin. No fuss over passports or custom-house, though we had carefully provided cause! This was beginning badly, and we were disappointed at our tame experience.

On our arrival in St. Petersburg, we were not even asked for our passports. Curiosity became restless within us. Was there some sinister motive in this neglect, after the harrowing tales we had heard from a woman lecturer, and read in books which had actually got themselves printed, about gendarmes forcing themselves into people's rooms while they were dressing, demanding their passports, and setting a guard at their doors; after which, gendarmes in disguises (which they were clever enough to penetrate) followed them all over the country? Why was it thus with them, and not with us? The why ripened gradually. We inquired if the passports were not wanted.

"No; if you intend to remain only a few days, it is not worth while to register them," was the startling reply; and those wretched, unwieldy parchments remained in our possession, even after we had announced that we did not meditate departing for some time. I hesitate to set down the whole truth about the anxiety they cost us for a while....