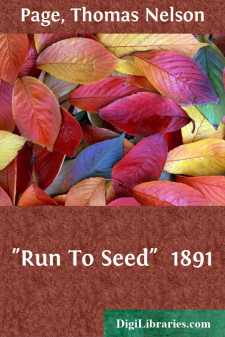 Jim's father died at Gettysburg; up against the Stone Fence; went to heaven in a chariot of fire on that fateful day when the issue between the two parts of the country was decided: when the slaughter on the Confe'd-erate side was such that after the battle a lieutenant was in charge of a regiment, and a major commanded a brigade.

This fact was much to Jim, though no one knew it: it tempered his mind: ruled his life. He never remembered the time when he did not know the story his mother, in her worn black dress and with her pale face, used to tell him of the bullet-dented sword and faded red sash which hung on the chamber wall.

They were the poorest people in the neighborhood. Everybody was poor; for the county lay in the track of the armies, and the war had swept the country as clean as a floor. But the Uptons were the poorest even in that community. Others recuperated, pulled themselves together, and began after a time to get up. The Uptons got flatter than they were before. The fences (the few that were left) rotted; the fields grew up in sassafras and pines; the barns blew down; the houses decayed; the ditches filled; the chills came.

"They're the shiftlesses' people in the worl'," said Mrs. Wagoner with a shade of asperity in her voice (or was it satisfaction?). Mrs. Wagoner's husband had been in a bombproof during the war, when Jim Upton (Jim's father) was with his company. He had managed to keep his teams from the quartermasters, and had turned up after the war the richest man in the neighborhood. He lived on old Colonel Duval's place, which he had bought for Confederate money.

"They're the shiftlesses' people in the worl'," said Mrs. Wagoner. "Mrs. Upton ain't got any spirit: she jus' sets still and cries her eyes out."

This was true, every word of it. And so was something else that Mrs. Wagoner said in a tone of reprobation, about "people who made their beds having to lay on them"; this process of incubation being too well known to require further discussion.

But what could Mrs. Upton do? She could not change the course of Destiny. One—especially if she is a widow with bad eyes, and in feeble health, living on the poorest place in the State—cannot stop the stars in their courses. She could not blot out the past, nor undo what she had done. She would not if she could. She could not undo what she had done when she ran away with Jim and married him. She would not if she could. At least, the memory of those three years was hers, and nothing could take it from her—not debts, nor courts, nor anything. She knew he was wild when she married him. Certainly Mrs. Wagoner had been careful enough to tell her so, and to tell every one else so too. She would never forget the things she had said. Mrs. Wagoner never forgot the things the young girl said either—though it was more the way she had looked than what she had said. And when Mrs. Wagoner descanted on the poverty of the Uptons she used to end with the declaration: "Well, it ain't any fault of mine: she can't blame me, for Heaven knows I warned her: I did my duty!" Which was true. Warning others was a duty Mrs. Wagoner seldom omitted. Mrs. Upton never thought of blaming her, or any one else. Not all her poverty ever drew one complaint from her sad lips. She simply sat down under it, that was all. She did not expect anything else....