Royal Palaces and Parks of France 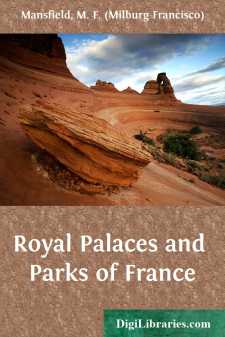 "A thousand years ago, by the rim of a tiny spring, a monk who had avowed himself to the cult of Saint Saturnin, robed, cowled and sandalled, knelt down to say a prayer to his beloved patron saint. Again he came, this time followed by more of his kind, and a wooden cross was planted by the side of the "Fontaine Belle Eau," by this time become a place of pious pilgrimage. After the monk came a king, the latter to hunt in the neighbouring forest."

It was this old account of fact, or legend, that led the author and illustrator of this book to a full realization of the wealth of historic and romantic incidents connected with the French royal parks and palaces, incidents which the makers of guidebooks have passed over in favour of the, presumably, more important, well authenticated facts of history which are often the bare recitals of political rises and falls and dull chronologies of building up and tearing down.

Much of the history of France was made in the great national forests and the royal country-houses of the kingdom, but usually it has been only the events of the capital which have been passed in review. To a great extent this history was of the gallant, daring kind, often written in blood, the sword replacing the pen.

At times gayety reigned supreme, and at times it was sadness; but always the pageant was imposing.

The day of pageants has passed, the day when lords and ladies moved through stately halls, when royal equipages hunted deer or boar on royal preserves, when gay cavalcades of solemn cortèges thronged the great French highways to the uttermost frontiers and ofttimes beyond. Those days have passed; but, to one who knows the real France, a ready-made setting is ever at hand if he would depart a little from the beaten paths worn smooth by railway and automobile tourists who follow only the lines of conventional travel.

France, even to-day, the city and the country alike, is the paradise of European monarchs on a holiday. One may be met at Biarritz on the shores of the Gascon gulf; another may be taking the waters at Aix or Vichy, shooting pigeons under the shadow of the Tete de Chien, or hunting at Rambouillet. This is modern France, the most cosmopolitan meeting place and playground of royalty in the world.

French royal parks and palaces, those of the kings and queens of mediæval, as well as later, times, differ greatly from those of other lands. This is perhaps not so much in their degree of splendour and luxury as in the sentiment which attaches itself to them. In France there has ever been a spirit of gayety and spontaneity unknown elsewhere. It was this which inspired the construction and maintenance of such magnificent royal residences as the palaces of Saint Germain-en-Laye, Fontainebleau, Versailles, Compiègne, Rambouillet, etc., quite different from the motives which caused the erection of the Louvre, the Tuileries or the Palais Cardinal at Paris.

Nowhere else does there exist the equal of these inspired royal country-houses of France, and, when it comes to a consideration of their surrounding parks and gardens, or those royal hunting preserves in the vicinity of the Ile de France, or of those still further afield, at Rambouillet or in the Loire country, their superiority to similar domains beyond the frontiers is even more marked.

In plan this book is a series of itineraries, at least the chapters are arranged, to a great extent in a topographical sequence; and, if the scope is not as wide as all France, it is because of the prominence already given to the parks and palaces of Touraine and elsewhere in the old French provinces in other works in which the artist and author have collaborated. It is for this reason that so little consideration has been given to Chambord, Amboise or Chenonceaux, which were as truly royal as any of that magnificent group of suburban Paris palaces which begins with Conflans and ends with Marly and Versailles.

Going still further afield, there is in the Pyrenees that chateau, royal from all points of view, in which was born the gallant Henri of France and Navarre, but a consideration of that, too, has already been included in another volume....