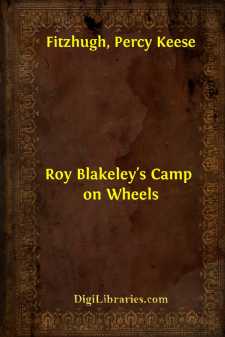 Maybe you think just because scouts go camping in the summer time, and take hikes and all that, that there's nothing to do in the winter. But I'm always going to stick up for winter, that's one sure thing.

Anyway, this story isn't exactly a winter story, it's a kind of a fall story—lightweight. Maybe after this I'll write a heavyweight winter story. Dorry Benton (he's in my patrol) says that if this story should run into the winter, I can use heavier paper for the last part of it. That fellow's crazy.

Believe me, there's plenty happening in the fall and in the winter; look at nutting and skating and ice-boating. Only last winter there were two big fires here in Bridgeboro and one of them was the High School. Gee whiz, what more could you want?

But the best fire I ever went to was when the Brewster's Centre railroad station burned down. That was three or four years ago, and the railroad decided that as long as there was going to be a big war in Europe, they wouldn't build a new station.

It won't do you any good to look on the map for Brewster's Centre, because you won't find it. Even with a microscope you couldn't find it. The reason you can't find it is, because it isn't there. I guess the men who made the map couldn't make a small enough dot. That's one thing I'm crazy about—maps. But I hate geography—geography and cough mixture. But I'm crazy about apple dumplings.

Anyway, you'll have to take my word for it that Brewster's Centre is four or five stations above Bridgeboro. There isn't any man named Brewster. He went out West about fifty years ago. I guess he forgot to take his centre with him. Anyway, it's up there. I guess nobody wants it.

There are about a dozen people up in Brewster's Centre who go to the city; gee, you can't blame them. So the railroad put an old passenger car on a side track up there and boarded up the under part so you couldn't see the wheels, just the same as on a lunch wagon. They partitioned off part of the inside of it for a ticket office and made a window in the boards, and the rest of the car was a waiting-room. There was a stove in the corner. It was like the Pennsylvania Station in New York, only different. They used the same old sign that used to be on the regular station and it looked funny sprawling all over the side of that car. It said:

Now comes a lapse of three years—I got that out of the movies. Maybe if you've read all about our adventures you'll remember how my patrol, the Silver Foxes, hiked home from Temple Camp last summer. Believe me, that was some hike. The other two patrols came home later by boat. They said they had more fun without us. I should worry about them.

The second night after we were all home I started around to the church to troop meeting and I met Pee-wee Harris coming scout pace down through Terrace Street....