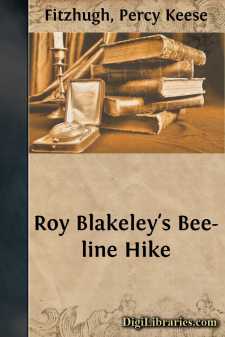 WE LOSE A MEMBER

Now I’m going to tell you about the bee-line hike. Maybe you’ll say you don’t believe everything I tell you about it, but one thing sure, it’s a straight story. It wasn’t so long, that hike, but—oh, boy!

Now the first thing I have to do in this story is to get rid of Charlie Seabury. That’s easy. Then the next thing I have to do is to tell you about Pee-wee Harris. Gee whiz, I wish we could get rid of him. That kid belongs in the Raven Patrol and when those fellows went up to Temple Camp they wished him on us for the summer. They said it was a good turn. Can you beat that? I suppose we’ve got to take him up to camp with us when we go. Anyway the crowd up there will have some peace in the meantime, so we’re doing a good turn, that’s what I said.

So this story is just about my own patrol and Pee-wee Harris, and some buildings and a couple of valleys and a hill and some pie, and a forest and some ice cream cones and a big tree and a back yard and a woman and a ghost and a couple of girls and ten cents’ worth of peanut brittle. It’s about a college, too. Maybe you think we’re not very smart on account of being kind of crazy, but anyway we went through college in ten minutes. So you can see from that how bright we are. That’s why we call ourselves the Silver Foxes.

Now Charlie Seabury (he has seven merit badges) has a grandfather who lives out near the Mississippi and his grandfather asked him to go out there and spend the summer. No wonder they call that man grand.

Charlie came to me because I’m patrol leader, and he said, “Shall I go out there and spend the summer?”

I said, “Sure, you might as well. If you hang around here all you’ll spend is nickels.”

He said, “But when you start up for camp you’ll want a full patrol, won’t you? You can’t count Pee-wee in the Silver Foxes.”

“Talk of something pleasant,” I told him. “You go ahead out west and leave the patrol to us. We’ll find a new member and when you come back in the Fall you can start the new patrol that Mr. Ellsworth is always talking about.”

He said, “Good idea; what shall we call it?”

“Call it the police patrol or whatever you want to, I don’t care,” I told him.

He said, “Well, I guess I’ll go. My grandfather has a big apple orchard and everything, and I can go swimming in the Mississippi. I’ll write to you.”

“How is that going to get me any apples?” I asked him. “Go ahead, the sooner the quicker, and I’ll have fewer Silver Foxes to worry about. Let your grandfather worry for a while.”

So that’s the end of Charlie Seabury in this story. We lost a scout and his grandfather lost an apple orchard. I should worry. Maybe, later, you’ll hear about the Laughing Hyenas that he started. But believe me, there are laughs enough in this story without bothering our heads about that new outfit.

We had about two weeks to hang around Bridgeboro (that’s where we live) before starting for Temple Camp....